Once the third quarter of the school year starts, there’s only one thing on the majority of the student body’s mind: Surprise Day. Simply uttering these two little words in the hallway can spark comments and rumors that circulate throughout the school in a matter of minutes.

“I thinks its gonna be next Wednesday [March 2] because I heard someone talk about it, and they said it has to be before Spring Break … Most teachers give tests Thursdays and Fridays, so Wednesdays are perfect,” senior Maddie Duncan said.

The date of the annual event is determined by the Administration and coordinated by members of Student Board. While many teachers may claim to know the date of Surprise Day, only those involved in the Administration or Student Board are aware of the actual date. This knowledge of coveted information puts many of these people under constant scrutiny.

This is freshman Cori Johnson’s first year on Student Board and first experience with the infamous Surprise Day cross examination.

“When everybody thought the 19th [of February] was Surprise Day, in the fifth block my whole class called me ‘it’ because they were so mad that it wasn’t Surprise Day, and they [were pretending] I wasn’t there. There was a girl who stared at me for five minutes straight asking ‘When is it?’ over and over again,” Johnson said.

Perhaps the most surprising thing about Johnson’s classmates’ intensity is that they have not yet experienced Surprise Day for themselves. “They have no idea what to expect, but I’m really excited that the freshmen are getting so in to it,” Johnson said.

Mrs. Lori Spanbauer’s Block D Theology II class is comprised of sophomores anxiously awaiting the arrival of their second ever Surprise Day. These students often hypothesize and record their Surprise Day theories on the dry erase board before class begins. 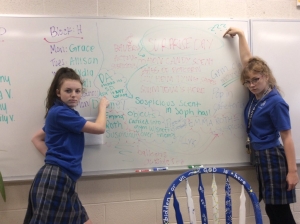 Spanbauer considered sophomore Rayna Bartling to be a “ringleader” of these brainstorm sessions. “We walk in and pull our resources together and get everyone to say what is going on,” Bartling said.

Her theories usually revolve around uncharacteristic behavior of Student Board members or strange occurrences around the school. “A weird smell in Soph Hall will arouse a lot of suspicion,” Bartling said.

For junior Annika Zimmerman, the mystery surrounding Surprise Day is one of the best parts. “Not knowing [the date] makes people curious and the idea of a surprise is exciting,” Zimmerman said.

Occasionally, students can guess it is Surprise Day just before the reveal. An unusual announcement or unexpected pep rally are often precursors to the highly anticipated announcement. “Freshman year, as soon as the announcement started, I knew, but all other times it has been a surprise,” Zimmerman said.

This will be senior Maddie Duncan’s fourth and final Surprise Day, and Duncan is very familiar with various theories surrounding it. “People see if anything is going on, and they also listen to announcements that week and base it off that. Also, they check out what StuBo people are wearing, like tennis shoes or a shirt under their polo,” Duncan said.

Every year there is some worry about the hype around Surprise Day overshadowing the actual event, but Duncan has always been surprised, especially last year.

One of the reasons students love Surprise Day so much is that it breaks up the monotony that often occurs during the last semester of the school year. “The long winter months make me so bored, and Surprise Day is something I can look forward to,” Bartling said.

Surprise Day without secrecy is like April without Field Day. Without the hype and excitement leading up to it, the concept of getting your face painted and racing your best friend through an in atable obstacle course is not as thrilling. Despite the ambiguity surrounding Surprise Day, there is one thing that students can count on: expecting the unexpected.