It is difficult to imagine a Crusader basketball game without Marian cheerleaders or a Prep football game halftime without the Marian dance team. It is challenging to watch their performances without feeling the energy, enthusiasm and spirit radiate from each team member. Above all, it is nearly impossible to mention Marian’s dance and cheer teams without the word opportunity.

For 17 Marian cheerleaders, the Christmas season extended four days longer than usual. From Dec. 26-30, this group of freshmen, sophomores, juniors and seniors alike seized the opportunity to showcase their hard work at the Alamo Bowl. While the Stanford Cardinals and TCU Horned Frogs were in the locker rooms during halftime, the cheer girls got their chance to take the field. Dozens of hours of grueling practice brought them under the lights and thundering roars of 58,000 fans in San Antonio, Texas.

Hands down, this trip was freshman Lauren Mendlik’s favorite part of the cheer season thus far. “It was so cool being able to perform in front of so many people,” Mendlik said.

The Marian cheer girls weren’t alone on the sea of green turf. “There were eight states, ten different schools. There were 150 people total,” Mendlik said. 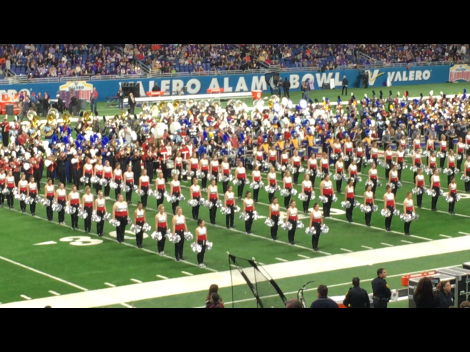 This has been Mendlik’s first year on an official cheer team, and the opportunities have been astounding. “I didn’t think I’d ever be able to perform halftime at a bowl game. It was so much fun,” she said.

From a senior’s perspective, the Marian cheer team has certain advantages that younger members may not realize. “This is my third different coach in four years. It’s definitely different – you have to learn how to work with different people. I think that’s almost an advantage over people that are with the same coach for four years,” senior Maddie Vosik said.

Another advantage is, “Public schools can’t stunt, but private schools can stunt however they want. Most of our stunts are collegiate level,” Vosik said. This elevates Marian cheer’s performances, and in turn, their chances at outscoring opponents. The cheer team is accustomed to these high-level stunts in their routines, which gives them an edge against opponents. As for team goals this season, the cheer squad has their eyes set on state.

Both teams hosted a clinic on Jan. 6 for second to eighth grade girls. Attendees spent the day with the cheer and dance squads sharing wisdom, fun and a healthy dose of the Marian community. “We teach them dances and cheers,” junior Laura Tooley said. For dance team members, monthly fees can be upwards of $150, for cheer, $250. Team members said that this fundraiser was an effort to cover some of these fees.

As a member of the dance team, Tooley has seen the program’s growth firsthand. “The past three years has just been going to state. This year we [select] added Nationals,” Tooley said.

The team has built up their strength and confidence this year with each football game, basketball game and pep rally. The Varsity team, which is made up of all dance team members, attended a Universal Dance Association (UDA) summer camp which qualified the select team for Nationals.

Sophomore Lauren Zadalis, who is part of the Varsity team explained, “You learn three dances, then perform those three dances. You learn them over the course of one day, have one day to refresh them, then are tested over them.” Blue ribbons are awarded when dancers perform the routine “with few to no memory errors” and expressive facials, “not necessarily on the execution of the steps and perfect technique,” Zadalis said.

“For our team to qualify for nationals, every single girl on varsity and select together all got blue ribbons,” Zadalis said. The work of the entire team has elevated the enthusiasm of the select girls as they face fierce competition this year. On Dec. 10, select competed against five other teams in the Pom Class A division at UNO and scored a runner-up trophy. 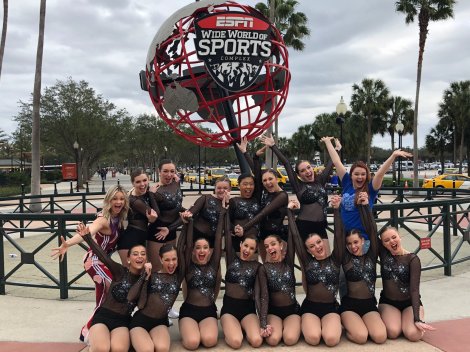 From Feb. 2 to the 4, the select dance team carried the success of their entire team at UDA camp onto the Nationals stage in Orlando, Fla. Select not only scored well, they made it into finals, finishing in 17th place for Jazz Routine in small schools and 16th place for Pom Routine in the small school division. Their performance will be aired on ESPN1 in the following months. Marian’s student body got a glimpse into the hard work of both teams on Feb. 6 at an all-school pep-rally where teams performed their competition routines.

Both the dance and cheer teams are reaching for the stars as the spring season approaches. Zadalis said it best: “The only way we can go is up.”