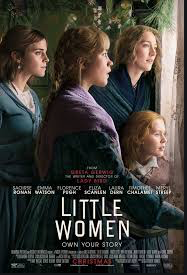 On Dec. 25,  “Little Women” was released into theaters. This movie is a remake of the popular book first released in 1868. This remake of the book is not the first time it was portrayed on film. Originally the first movie was released on Dec. 21, 1994. The movie is set in Massachusetts during the Civil War, and is about four girls, Jo, Meg, Amy and Beth growing up during that difficult time and how all of their journeys are all so different and unique.

Being set during the Civil War, it gives a very accurate take on what it was like to live during that time. However, if you have never read the book or seen the original movie, it can be very hard to follow along at the beginning. The movie jumps forwards and backwards seven years and can be slightly hard to follow if you are not familiar with the story. This movie is rated PG and can be found in any local movie theater. “Little Women” is a very heartfelt movie about women empowerment, but it will touch people of all ages.

“Little Women” has a running time of 2 hours and 15 minutes. It is nominated for numerous awards this year, including three Oscars. The movie stays faithful to the original story told in the book, but director Greta Gerwig creates a new and meaningful take on classic like we have never seen before. After seeing this movie, I would give it 4 out of 5 stars. The beautiful cinematography and great choice of actors really makes up for the slightly hard to follow plot at the beginning. This is a must see movie carries a message with it that will speak to a wide range of people, making this remake of a popular classic, one I would not miss out on.