The cross country season has come to a close as junior Emily Saalfeld represented Marian one final time for the 2018 season during the state meet on Oct. 19. Her 44th finish out of 96 runners for Class A girls “puts a good cap on a great season,” head coach, Mr. Roger Wright, said.

Marian was one point short of qualifying for state as a team, however, Saalfeld’s time individually qualified her to run at State. “As a whole, the team did well at Districts, and everyone ran the best they could. Even though we did end up unable to qualify for state as a whole team […], everyone gave their best effort. My teammates ran so great and I couldn’t be more proud of everyone, all the effort that was put in throughout the season and to be able to run with the girls that I did,” Saalfeld said reflecting on the season. 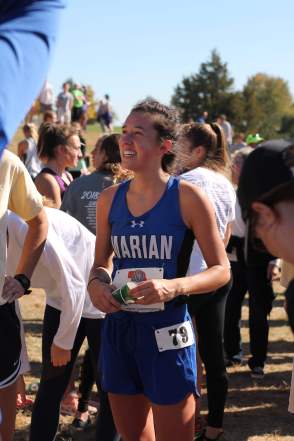 Marian’s four coaches and other runners traveled west to Kearney on Oct. 19 to encourage her during the final race. Saalfeld said, “I had so many people from the team come cheer me on and support me. I didn’t feel like the only runner from Marian so much anymore because I knew they were there and would help me when I needed it. […] I was proud to represent Marian!”

Marian’s varsity and junior varsity team was made up of a total of 97 hardworking and dedicated runners this year. Each grade was represented and new friendships were made. “Cross-country is a sport where you can compete as an individual but still compete as a team,” Saalfeld said reminding everyone of the uniqueness and competitiveness the sport is.

Happy Gnimocemoh Week! Today’s theme: dress like your favorite high school movie character! From Regina George’s mom to “that one extra in that one movie,” Network staffers are sure to win best dressed 🎥 🍿
BEST DAY OF THE MONTH!! The September Network issue is finally out! If you haven’t gotten one yet, swing by room 304 to pick yours up!! For our online followers: stay tuned-stories will be posted online throughout the week!! Big thank you to the staff members for all of their hard work!
Happy birthday to everyone’s favorite staffer!! The Network Staff celebrated Mrs K’s birthday in class while working on this months upcoming issue! Stay tuned for more updates about the Network process 🗞🗞
As we passed down our positions to the juniors today (and played dodgeball against our rival yearbook staff) we have officially ended our year as the Marian Network Newspaper staff. This has been an incredible privilege and we are so grateful we could ~unmask~ Marian throughout this crazy year. Thanks for reading, xoxo the Network 2021 🤍