On an average day in the life of a Marian girl in 1980, the morning would begin by piling into a car with as many Marian girls as the small four-door sedan could fit. Carpooling was not only the norm, but almost a prerequisite in order to get to Marian.

Some classes throughout the day would include regular math, science and literature courses, but the students had a few unique choices, too. The favorite theology course was Death and Dying, taught by the beloved Sister Midge Peterson.

Passing the middle staircase, students would see the sewing room used in the home economics course. Even as students passed the bathrooms, the stench of cigarettes filled the hallways. Principal Susie Sullivan, who graduated in 1980, recalls the way she selected the college she would attend post graduation. “I remember looking at few tri-folds of various colleges. Based solely on the cheesy photographs and slogans, I selected my college. I proceeded to fill out one side of the tri-fold and mail it in, and that was that,” Sullivan said.

Jumping all the way into the early 2000’s, substantial changes were made to Marian. Curriculum was improving including adding dual enrollment as an option for students. Mrs. Alee Cotton, who graduated in 2005, remembers only small changes compared to Marian now. “We were always getting in trouble for untucked shirts and gum, which are not even things we give students points for now,” Cotton said.

As the uniforms changed from green to blue, Marian started working on some major improvements. In 2013, the STEM lab was in the works and the PAC was being built. A very recent graduate, and now math teacher, Ms. Megan Han, could think of very few differences between Marian then and now. “It seems like I never even left Marian, despite the building improvements,” Han said.

Despite Marian growing and changing throughout the years, Marian graduates point out something that never changed. “After returning to Marian so many years later, the overall attitude of Marian girls has not changed at all. The silliness of students along with their amazing work ethic is what has pushed the school to want to improve along with the students,” Sullivan said.

Ladies who lead: Marian, traditions carry down through families

For most girls, Marian is simply high school. For others, it’s a legacy. As a girl entering the uncharted territory of high school, nothing is more stressful than the added pressure of the prospect of following in your mother’s footsteps.

Keep it up Seniors Emma Morford and Claire Pelan do their best each day to make the most of what’s left of their Marian experience. 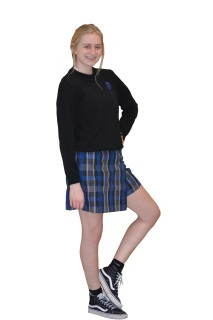 This is a struggle that senior Claire Pelan knows too well. “It was intimidating coming to Marian because all of the teachers knew ‘Katie Crouchley Pelan’,” Claire said. “She would always tell me stories about Mr. Baker, trips they took and traditions throughout her four years. I was so excited but they were big shoes to fill!”

Katie Crouchley Pelan ’90 may have left behind a big footprint, but Claire feels that while she wants to make her own impression at Marian, the pressure wasn’t a hindrance, but encouragement instead. “It’s nice, because it turns out that we were involved in different things. It was so awesome to have someone who went through the same things as me and encouraged me to try new things I never knew I would like,” Claire said. 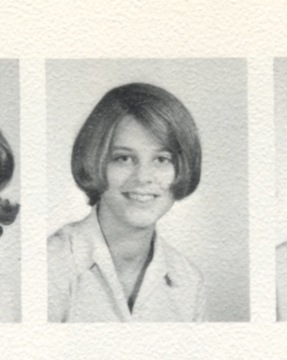 For other students like senior Emma Morford, rather than leaving an impactful legacy, Marian serves as a family scrapbook of sorts — her mother, Kara Kalal Morford ’95 and grandmother Peggy O’Doherty ’69 also attended Marian.

“It’s nice to have people around who are as excited about Field Day as I am,” Emma said. “We all cried last year.” As far as pressure goes, Emma doesn’t experience it — to some degree.

“I’m not really familiar with the pressure,” Emma said. “They never really set standards grade-wise or said ‘Oh, you need to do this’. The pressure made me more open; being able to bloom when no one was judging was great.”

In each girl’s four years at Marian, the idea of carving her path is one that can be especially daunting. However, rather than using this pressure to close herself off, Morford is one of the many Marian daughters who made it her mission to channel it into enthusiasm.

“Take your own path, because if you were to be the exact same as your mother or grandmother, you wouldn’t be you,” Morford said. 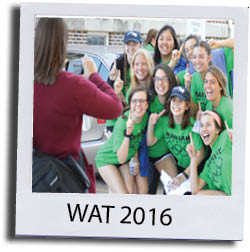 WAT 2016: Earlier this year, Marian seniors pose for a photo on the morning of Walk-A-Thon.

WAT 1975 : Marian students head out for the annual Walk-A-Thon activity.

StuBo 2017: Today, Student Board members continue to lead the student body in celebration on Surprise Day, on Feb. 2. 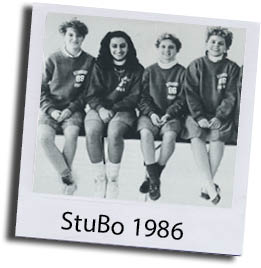 StuBo 1986: Four members of the ’86 Student Board smile in their sweatshirts. 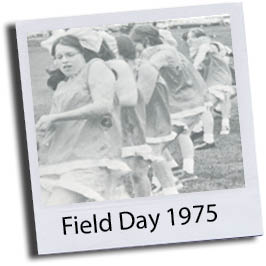 Field Day 1975: Marian girls from the 1975 freshman class battle in the traditional Tug of War competition.

Field Day 2016: Cheerleaders from the Class of 2019 in their Freshman Fastball uniforms, sing out during demonstration.