Natural disasters cannot be prevented; all we can do is prepare for the worst and rebuild from the damage. Rain and wind destroyed southeast Texas and parts of Louisiana on Friday, Aug. 25. What seemed like endless rain has torn apart families and communities.

According to the National Weather Service, Hurricane Harvey reached the shores of Texas and built up to a Category 4 hurricane on a scale ranging from 1 to 5. A category 4 hurricane is considered catastrophic and expected to inflict major damage. Harvey continued until Sept. 2, with a death toll of 71 people. 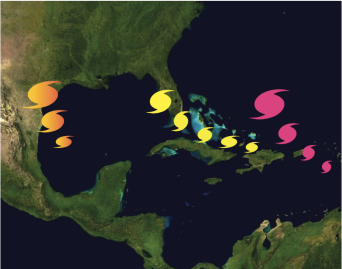 Ranking as one of the most costly natural disasters in United States history, Hurricane Harvey has forced families to begin an almost entirely new life. According to AccuWeather on Sept. 1, picking up the pieces from Hurricane Harvey will cost roughly $190 billion.

Marian 2016 alumna Claire Davis attends Tulane University in New Orleans and is just one of the millions of people who have been affected by the hurricane. “My flight to New Orleans was cancelled when I was trying to get back to school. I had to come down a day early in order to avoid the storm, and class ended up getting cancelled at Tulane,” Davis said.

Along with Texas and Louisiana, Belize, Nicaragua, Honduras, Yucatán Peninsula and the Windward Islands were struck by Hurricane Harvey. Communities in Houston, Texas were hit the hardest in the U.S., enduring the bulk of the storm.

Not only were buildings destroyed, but the water from the flooding likely caused contamination that will take months to clean up. A devastating 51.88 inches of rain was measured in Houston as of Aug. 29.

The winds of Hurricane Harvey reached up to 132 mph, faster than the world’s fastest rollercoaster.

While communities were ravaged by the tropical storm in southeast Texas, families here in Omaha are also impacted. Sophomore Mia Hennessey’s father, Shane Hennessey, was sent to assist in reconstruction. Shane is a structural engineer at Olsson Associates in Omaha and a member of Nebraska Task Force 1(a search and rescue team).

“He mostly is helping in assessing the damage done to buildings and roads. He is also helping find safe routes and clear roads for people to be able to travel,” Mia said. Shane and his team was credited with helping a 92-year-old woman who was trapped in her bed for two days because the room was submerged in water.

Shortly after helping the Houston community from Aug. 24 through Sept. 5, he was sent home for 48 hours. Following his short return, Shane was sent to help the victims of Hurricane Irma on Sept. 7 until Sept. 14.

The natural disaster that ravaged Texas and its surrounding areas is one that will not be forgotten for a long time. “It’s a situation that hits home for a lot of the locals here, since it’s a reminder of all that happened with Katrina,” Davis said.

In times like this, uniting together to support those affected is sometimes the most helpful thing we can do.