Radiant Marian model Senior Vicky Bongomin looks on with a smile while photographed at the OFW. Photo courtesy of Kathy Rae.

Omaha Fashion Week has been supporting local fashionistas for 10 years. Omaha holds a spring and fall show annually. In the past decade, Omaha’s show has grown into one of the biggest fashion weeks in the United States.

In the past year Omaha Fashion Week bought their own 30,000 square-foot building on 15th and Cuming. The new space is called Omaha Design Center.

With this new area, the company extends its reach into more than just fashion. They work with up-and-coming models, hair stylists, makeup artists, show producers, designers and outside sponsors. It takes many resources and people to make the production run so smoothly. 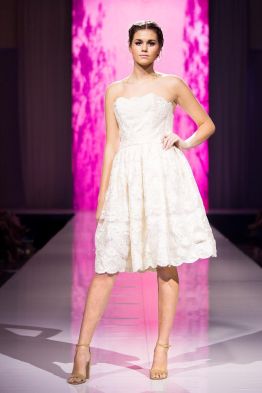 Standing tall Junior Mia Mixan strikes a pose at the end of the runway modeling for Miranda Hanson. Photo courtesy of Heather and James Hooten.

“There are so many ways to be involved in Omaha Fashion Week. You can volunteer and help run the show, or you can go to castings to model,” junior Mia Mixan said.

Casting for models usually occurs in January and July. This is how most teenagers get involved. Recruiters from Omaha Fashion Week also look out for young, naturally-glowing local girls and invite them to come to these tryouts. The primary supplier of models for Omaha Fashion Week is from Develop Model Management. Develop is the primary and largest modeling agency in Omaha.

Mixan was a model every day of fall Fashion Week (Aug. 21-26). Each of her designers started in Omaha. Although some of her designers have moved on to bigger fashion weeks such as Des Moines, Los Angeles and New York, they come back to support their hometown. Mixan is new to the modeling scene, but she said she wants to continue into college. 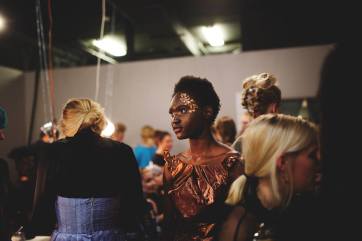 Glitter Queen Senior Vicky Bongomin sparkles as she waits to walk the runway.

“This is my first year modeling and I don’t know what my direction is yet, but I really enjoy doing it. I hope to do it for as long as the industry allows,” Mixan said. She first signed on with Develop back in July. They schedule any and all models needed events and productions.

“Omaha Fashion Week was a great way to meet new girls from other schools. I got to go to seminars before the week of to learn how to walk and act,” Kaipust said.

“On Friday, they did a ‘homecoming night’ so I got to model designs from 2010. They showed every year starting with 2008. It was cool to see old styles,” Kaipust said. 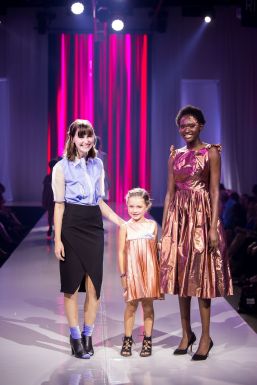 Bongomin shared a story from the runway. “For Alesha Johnson’s collection, I was paired up with the cutest little girl who wore a mini dress of the one I wore. The first walk everyone was supposed to go down the runway by themselves, but when it was her turn she wouldn’t go until I went. We ended up holding hands and walking out last together, receiving a standing ovation,” Bongomin said. This collection had versions of most dresses in kids sizes.

Omaha Fashion Week impacts the community for the better. It has brought light to fashion and design that wouldn’t be available to the area if it wasn’t for the Omaha Design Center.