“The secret to life is find something you love to do and make a living from it.” 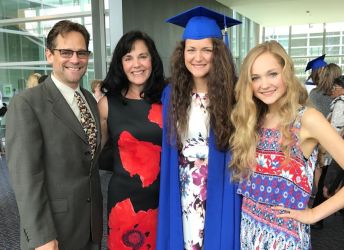 Which is EXACTLY what Hollywood movie editor and Marian dad, Tom Elkins did.

Elkins’ passion started at age 10, when he made short horror films using his sisters as actresses. This love for filming and editing continued into his 20s when he worked at Godfather’s Pizza and made commercials for the company.

Shortly after getting married in his 20s, an idea of “Let’s move to L.A.!” was brought to the table. Elkins and his wife Susan dropped their things and hopped on a plane. Soon, his passion started to slowly come to life.

He began as a production assistant until his first chance at editing arose.

He first started off as an assistant editor for movies such as “The Da Vinci Code” and “Red Eye.”

Elkins now works to compile movies together, collecting sounds, pictures and film every day to create the story. “My job is basically one big puzzle of sound, picture and film,” Elkins said.

Elkins specializes in horror movies; this is because his first opportunities were in fact scary, but, even as a kid he had a love for this genre.

“Creating scary movies is so fun because of the audience experience. Everyone coming together in one room to be scared is communal. It’s great!” Elkins said.

Elkins has the opportunity to travel frequently for his job. “It’s never easy being away from my family in Omaha, but traveling creates fun family visits, and maybe even them meeting some celebrities,” Elkins said. He loves the feeling of home in Omaha, being able to step outside and smell the freshly cut grass.

Elkins knew he wanted to raise his two daughters in Omaha. “Raising my kids in the great city, just felt right,” Elkins said. Samantha graduated from Marian in 2017 and Abigail is currently a sophomore.

Elkins’ favorite part of the job is being with the audience when they watch the movie, being able to see and hear people’s raw reactions to the work he created.

He loves the aspect of storytelling with sound and picture then seeing it come together.

He mentioned the hardest part of the job is the pressure of fulfilling the vision of the company paying him.

Another difficult part of being a movie editor for Elkins is the time spent away from his family. “Working in Hollywood can be very difficult at times and you have to have thick skin, but you just have to love and stick with it,” Elkins said.

One of the many projects he is currently working on is a documentary of Marian Field Day.

“I’m lucky because I have followed my dream, but could never have done it without the love and support of people around me. It is a gift to be supported, and to support someone is giving a gift,” Elkins said. Elkins is an inspiration to many young people wanting to follow their dreams. And c’mon, how many people can say they watched baseball and ate pizza with Tom Hanks at his house?