Humans trust what we see. However, what we see may not always be accurate. This mindset of judging people by first look was thrown away by the project Humans of New York. Humans of New York is a widely known page on most popular forms of social media that was created by Brandon Stanton in 2004.

He started by simply taking portrait photos of citizens of New York and telling their stories in the comments. The public was shocked by the stories told because the looks of the person in the picture may not have matched quite what the public thought they’d say.

Since it began, the page has expanded and he has traveled around the globe, collecting stories and sharing advice from the people of the world. Every post is personalized and offers a tidbit of life advice. Whether it is sad, happy or funny, the bottom line is don’t judge a book by its cover.

Here at Marian, students have stories to tell. A humans of Marian account was created by Annie Soener in 2015 as a way for students to give their advice to the whole school. The account has been passed down and currently is ran by Sofy Herrera and Shannon McSweeney. Contact either of them if you are interested in sharing your advice, Marian-style, through this account and follow @humans_of_marian on instagram to be updated with the feed. Below are the first two posts of the school year. 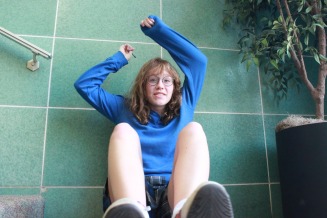 “Do you think you could describe exactly who you are?”

“Oh for sure I couldn’t. I literally don’t know who I am. Some days I’m super outgoing and relaxed, and then some days I’m sweaty. That’s the worst mood. Can I go on a tangent? Being sweaty is probably the worst feeling in the entire world, and I don’t know why anyone would choose to exercise or be out in the heat if they had the choice to not. You’re wet. Your body is physically wet.”

“I strongly believe in positivity. I feel like the only thing that stops ourselves from being successful is ourselves. So if we can change our mindset to a more positive outlook, we can achieve so much more than what we make ourselves out to be. I feel like putting ourselves down and thinking we can’t do more than we actually can really inhibits us from reaching our full potential. Every single Marian girl has so much potential. Marian girls are just extremely great people that can achieve so much in the world, and I feel like we should all really unleash our positivity. And we do every day at school, and I look forward to coming to school just because of that, because I get to see all the beautiful Marian girls and really feel the love every second in the hallways.”