On Oct. 1, a gunman opened fire on a crowd on the Las Vegas Strip in Nevada. Innocent concertgoers were shocked by the relentless attack on a night they hoped would be filled with easygoing country music.

As the deadliest mass shooting in modern American history, this tragic event has

inflicted irreparable damage on lives across the nation.

What should have been a carefree night of country music turned into a nightmare. Once the smoke cleared, 59 people were announced dead, including the perpetrator. Another 527 people were injured.

At first, the harsh sounds were assumed to be a malfunctioning speaker or some obnoxious fireworks. Concertgoers quickly realized the horrifying truth that the sounds were gunshots. The upbeat feel of the Route 91 Harvest Festival turned desperate.

The perpetrator of this massacre, Stephen Paddock, stationed himself on the 32nd floor of the Mandalay Bay Resort and Casino. This allowed him to have an easy aim at roughly 22,000 people walking around on the strip. The damage Paddock inflicted is not unfamiliar. The United States has a long and devastating history of mass shootings.

While we all feel the sting, sophomore Meredith Mueller has been personally affected by the tragedy in Las Vegas. Mueller’s aunt and uncle, Kati and Brendan Keating, were moments away from attending the music festival. They attempted to find tickets to go, but they were sold out. A close friend of the Keating’s was shot in the foot, while another was shot and killed.

Freshman Catherine Mashanic’s cousin, Patricia Hedlt, is head of the S.W.A.T. team in Las Vegas. Hedlt was on duty when the shooting took place and called in 11 trainees. Hedlt and her team worked 12 hour shifts for four to five days in order to deal with the aftermath.

When it comes to preventing tragedies, “You should have a background check. Guns can be used as self defense, Paddock did not use it for the right reasons,” Mueller said.

The most recent mass shooting besides Las Vegas was just last year in June of 2016, at Pulse nightclub in Orlando, Florida. The Pulse shooting claimed 49 innocent victims’ lives.

“It’s almost worse not knowing. If we knew, we could place blame on his motive. At this moment, we can’t place blame on a certain thing other than mental illness. It’s harder not knowing a motive because then you don’t know how to prevent it,” Freshman Grace Walsh said.

However, some people decided that knowing the motive is not what is important. “The number amazes me. Shootings are more frequent. Obviously, these are a big deal, but I am almost used to hearing about this,” junior Maria Alessandro said.

Each time there is a mass shooting, the number of deaths tends to go up. 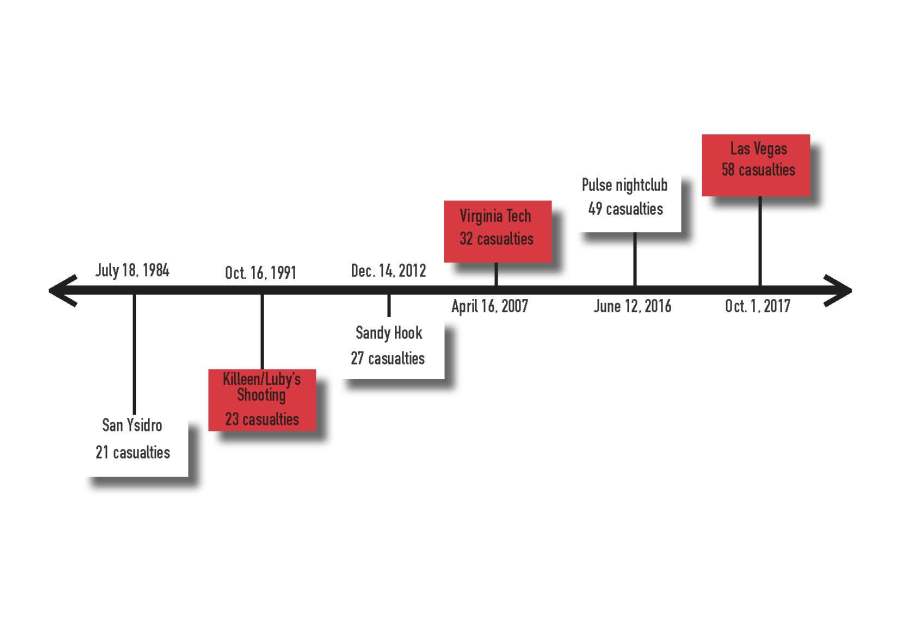 The Las Vegas tragedy has brought the gun control debate back into the spotlight. Paddock was able to secure a total of 47 guns. The police found some of his stash of firearms in his hotel suite and more at his house.

While some claim that the Second Amendment defends their right to own a firearm, other argue against this. It’s also common for people to suggest that if people cannot get ahold of a gun, they will be able to inflict damage other ways, such as with a hand grenade or a knife. 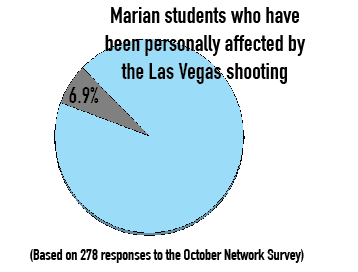 A common argument used against gun control is that the harm is done by the person, not the gun.

Gun laws are not the same across the United States; regulations vary by state. Federal law regulates gun ownership to some degree. For example, there are restrictions on certain types of firearms.

The state of Nebraska does not require a waiting period to purchase a gun, but an electronic background check will be conducted before the purchase.

Nebraska residents can apply for a concealed handgun permit. However, if a person is convicted of misdemeanor, domestic violence or subject to a restraining order, that person may not purchase or possess firearms. Illegal arms in Nebraska include machine guns, short rifles or short shotguns, defaced firearms and stolen firearms.

Despite these current regulations, lives were lost in the Route 91 Harvest Country Music Festival and the tragedy will not soon be forgotten.

MEET THE YEARBOOK STAFF!
JANUARY YEARBOOK DUMP! This month was full of basketball, wrestling, swim and dive, and bowling! Winter formal was a fun event Marian hosted, the robotics team competed in competitions, show choir had rehearsals, and step team cheered at Marian events. During Catholic Schools week Marian had a fun but competitive teachers versus students volleyball game. At half time the dance team and staff had a performance together! Stay tuned for many more fun moments in February!
DECEMBER DUMP (late:))
Merry Christmas from Marian network and yearbook!! This Christmas the staffs adopted a family. Yearbook and Network came together and collected gifts and wrapped them in newspapers to give to our adopted family! 🎁 💝