Whether you love ‘em or hate ‘em, siblings make fall complete. They help you rake

leaves, carve pumpkins and in freshman Rylee Gregg’s case, act as a human shield for her friends in haunted houses. “We went to Bellevue Berry Farm and one of my friends was super terrified to go in a haunted house,” Gregg said. Of course, the group’s attempts to scare Gregg’s friend and the terrifying haunted house characters didn’t help. “When she turned around we’d jump and scream. One of the guys working there even said we’d be his dinner. My brother is like six feet tall, so in the end he had to end up being her bodyguard,” Gregg said. By the end of the haunted house, no one was eaten for dinner. In fact, Gregg’s friend seemed to enjoy the experience. “She would do it again. I think she had fun in the end,” Gregg said.

Snuggling up in sweats to watch a Halloween movie is a great way to spend the afternoon, or in junior Lizzie Byrne’s case, the entire day. “I started watching all the ‘Halloweentown’ movies around 10 a.m. and stopped around 4 or 5 p.m. I didn’t watch the fourth one because it’s awful. It wasn’t hard though, I’ve done it before. I’ve actually watched the first movie again since then,” Byrne said. Her friends, while not present, supported her binge watching. “When I told them they were like, ‘I respect that’,” Byrne said. 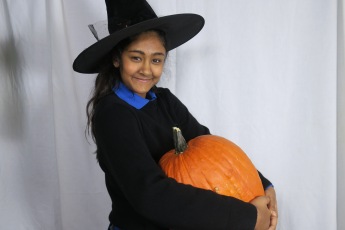 Fall weather makes for the perfect opportunity to jump in the leaves, pick apples or go on a walk to admire the changing scenery. For sophomore Isha Kishore’s friend, however, a brisk walk turned into a one-mile run. “She cannot do haunted houses. We had to force her to come with us. It was at the entrance of Haunted Hollow and the clown came out and he had a chainsaw. She saw him and ran from the entrance to the end of a dirt road which was about a mile. Her parents had to pick her up,” Kishore said. “Peaches the clown was actually really nice. But now she has a fear of haunted houses and clowns,” Kishore said.

Pumpkin-scented everything is a fall staple. For senior Kaci Kirchhoefer, that includes her head. “I was with my friends carving pumpkins and they were like, ‘You should put a pumpkin on your head’. So I was like, ‘Yeah, I’ll do it for $10’. It was a large pumpkin, I had room in there. I put a bag around my hair so the guts wouldn’t get in. My friends spun me and I wobbled around. I ran at them and they said it was scary. I showered later that night, but my friends said I smelled like pumpkin,” Kirchhoefer said. When asked what she would do with her newfound wealth, “Buy another pumpkin,” Kirchhoefer said.