Shakin’ it up with Schafer

It was Nov. 15, 2015 when one of my dreams became a reality, or so I thought. I used to play volleyball. I mean I literally ate, slept, breathed volleyball. Volleyball was everything to me: something I was good at, something I did with my best friends, something dedicated myself to weekly, and something I loved from the very bottom of my deep heart.

I started playing club volleyball when I was in sixth grade. During my younger years, I was on lower level teams. I was itty bitty and inexperienced, but really just wanted to give competitive volleyball a shot – see if I liked it. Well, it stuck.

By the time I was in seventh grade, I devoted myself to volleyball. I felt like I needed to elevate myself as a player. So, I did everything possible to be better. Looking back, I cannot believe the amount of work I put in because it was overwhelming… but I loved it. People started recognizing me for all the work I was doing. It was evident as it showed in my confidence and on the court itself.  I was chasing success and I fell in love with the process of it all.

After my first successful, fun school season at Marian, it was time for club tryouts. 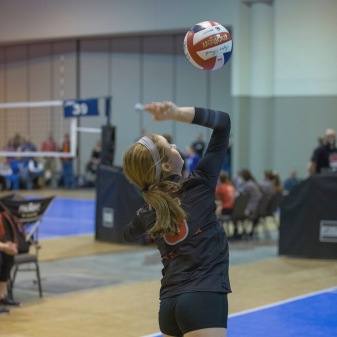 I went into tryouts confident, and just had a lot of fun. As tryouts ended, teams were being called out. The top team went first not even thinking I was going to make that team, my number was called. “…And 509.” I couldn’t believe it, I literally was in shock. All my hard work paid off, finally.

You’re thinking, “Ok, well, what’s the problem?” In every team, there are players and coaches. Coaches are like teachers: they can be really demanding and strict or they can

be laid back. Well, my coach was kind of crazy. Deep down, this coach wanted the best for each girl on our team, but that message was often blurry. Times of discouragement for girls, would be a time to break them down even more. The coach was so inside people’s minds that it was hard to play at the best ability possible. I wouldn’t even think about the game I was playing, just what my coach would do next.

Many girls who have played under this coach have felt the same way. They’ve felt like they wanted to quit the sport altogether – because going to practice and tournaments all the time, just wasn’t worth it.

Playing volleyball, a game I loved, just wasn’t fun anymore. By the end of an eight month season, I had lost all confidence in myself. And because of that, I gave up on myself and threw away something God gifted me with. Quitting volleyball is my biggest regret; because I didn’t just quit volleyball, I quit on myself. From these past experiences, I have learned to always believe in yourself and to never give up on something, even if there is a little bump in the road. After you give up on yourself, what do you have? Nothing much.

Since then, I have learned the importance of confidence. Being yourself is the best self possible. Not caring what people think of you, also plays a factor. Be you, be whoever you want to be – because the more you are yourself, the happier you will be.