One of the best ways to get into the holiday spirit is by listening to the joyful songs that play everywhere during the month of December.

On Sunday, Dec. 3, the Concert Choir, the Select Women’s Choir, orchestra, handbells and band classes performed an array of songs in two separate concerts to celebrate the upcoming Christmas season. This annual event was free and open to the public. This musical tradition was the perfect way to get the Marian community into the holiday spirit.

The concert was held in the Performing Arts Center Kish Auditorium, which also holds events such as the fall musicals and spring plays.

A crowd favorite traditionally performed last was the Hallelujah Chorus from “The Messiah” by George Frideric Handel, arranged by Bryceson Treharne. Marian alums were invited to join the choir and musicians on stage to sing this classic. This opportunity allowed graduates to remember their time at Marian while singing a holiday favorite.

“It just brings back old memories. I knew the Hallelujah Chorus senior year, I just forgot it since then so it was nice to come back and remember it,” Nikki Rhoades ’17 said.

Both choirs performed as separate ensembles for this concert. The orchestra and band accompanied the choirs for the final song. However, they had their own performances directed by instrumental teacher, Mr. Paul Niedbalski. Niedbalski even arranged one of the songs for the combined band and orchestra to perform.

“We spend time listening to different arrangements of the music Marian has purchased in the past. The arrangements turn out to be different every year,” Morrissey said.

Musicians and vocalists agreed that the time and effort given in the classroom helped them perfect their performances for the concert. Assistant to the Principal Mrs. Michelle Delisi also helped out as a stage manager to make sure the concert ran smoothly. 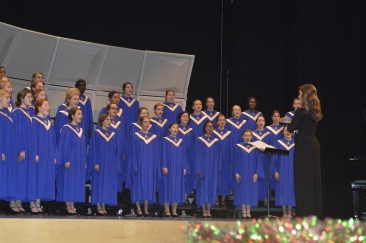 “The students have been preparing for the concert since the beginning of November,” Morrissey said. This shows the dedication students have to making sure the songs are polished.

The seasonal array of songs performed provided a celebration to launch the Christmas season for many.

BEST DAY OF THE MONTH!! The September Network issue is finally out! If you haven’t gotten one yet, swing by room 304 to pick yours up!! For our online followers: stay tuned-stories will be posted online throughout the week!! Big thank you to the staff members for all of their hard work!
Happy birthday to everyone’s favorite staffer!! The Network Staff celebrated Mrs K’s birthday in class while working on this months upcoming issue! Stay tuned for more updates about the Network process 🗞🗞
As we passed down our positions to the juniors today (and played dodgeball against our rival yearbook staff) we have officially ended our year as the Marian Network Newspaper staff. This has been an incredible privilege and we are so grateful we could ~unmask~ Marian throughout this crazy year. Thanks for reading, xoxo the Network 2021 🤍
Best day of the month!!! We’re so excited for you to read our October issue of the Network 👏🏻❣️🥳 If you didn’t get one, DM us or stop by room 304 or the Haddix to grab one!!!