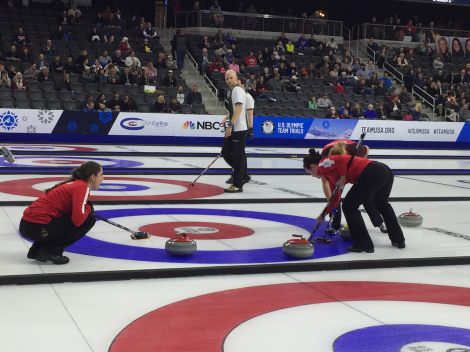 Competitive Curling One of the three women’s teams compete at Baxter Arena on Nov. 14. Team Roth took the winning spot to participate in the 2018 Winter Olumpics. Photo by Susie Sisson.

Baxter Arena announced this honor in July 2017 in partnership with the Aksarben Curling Club, USA Curling, the Omaha Sports Commission and the University of Nebraska at Omaha. Other venues that were ruled out in the selection include Jacksonville, Fla., Philadelphia, Pa. and Ogden and Provo, Utah. The final site choice was made by The Olympic Team Trials Selection Panel.

“Omaha has been the first stop for many world-class athletes on their way to the Olympic Games, and we are grateful the University of Nebraska Omaha will be a part of that tradition,” Trev Alberts, UNO Vice Chancellor of Athletics said.

Curling is like shuffleboard on ice. A stone, or rock, is slid across ice towards four concentric circles. The purpose is to get the rock as close to the center circle as possible. This is how you get points. The teams consist of four players. Curling is usually played with eight rocks. Eight to ten ends (matches) are played. The team with the most points at the end wins.

“I was really excited to learn that the curling trials were coming to Omaha. We’re a city that loves to participate. If a big sports event comes to town — even if we don’t know anything about that sport — we buy tickets and show up to support the teams. I love that sense of civic pride and participation,” English teacher Ms. Susie Sisson said.

There were 17 matches over the span of the week. For the U.S. two teams, one women’s and one men’s, curling is a part of the Winter Olympics that will be held in PyeongChang, South Korea Feb. 9-25, 2018.

“After attending the Olympic swimming trials over the last several years, I was expecting a similar atmosphere, but the curling trials were definitely more subdued and had lower attendance. But the event was still a lot of fun. Seeing Olympic-level athletes in their prime is pretty exciting,” Sisson said.

“We are very excited to host our first winter Olympic Trials, building on the success of the recent 2016 U.S. Olympic Team Trials for Swimming,” Wesley Hall, Chief Operating Officer of the Omaha Sports Commission explained. “We worked closely with University of Nebraska Omaha officials and the Aksarben Curling Club in putting together this bid and believe Baxter Arena will be a great venue for the Olympic Curling Trials.”

“I don’t know anything about curling, so the whole experience was a bit of a mystery to me. I really loved learning about the rituals and nuances of the sport: the special shoes, the brooms and other equipment, the way the team captains yelled at and encouraged their teammates. There’s definitely a lot of strategy involved in this sport,” Sisson said.