Pinkin’ it out Sadie Andrews ’18 and Maddie Vosik ’18 laugh after they danced on the big screen to their pre-synchronized dance. The girls sipped on Maui Wowi smoothies during the Creighton Pink-Out Game. Photo courtesy of Maddie Vosik.

Blue Jay fans bleed blue, but do they bleed red, too?

Omahans have had a long-standing internal struggle with who to root for during a Creighton versus Nebraska basketball game. Creighton fans have been criticized for rooting for Husker football and then, when the season changes, going back to their Blue Jay roots. Some would say that these fans are “bandwagoners” and are only rooting for the team that’s going to win.

“Some people say I can’t be a Creighton basketball fan and a Nebraska football fan, but I grew up both, so why not?” senior Sadie Andrews said.

For some Omahans it’s second nature to switch from red to blue once winter rolls around. As senior Maddie Vosik puts it, “Football is Go Big Red and basketball is Roll Jays. There’s no question.”

For many Marian students, this is just how they grew up. They didn’t even realize the rivalry.

Girls go back and forth with who they are going to side with each year. Almost 11 percent of responses from the January Network survey said who they are while watching a game with dictates who they will cheer for.

“I went to one of the games, and I was cheering for Creighton because I thought they would win. I have a love-hate relationship with the teams because I want to see them both win but I know they can’t win against each other,” sophomore Mia Hennessey said.

With Creighton basketball thriving like it is, many students have taken the opportunity to attend games at the Centurylink Center.

“I’ve been going to Creighton games with my dad since I can remember. Every year the Creighton/Nebraska game is one of the most fun games because it’s a basketball rivalry between two teams in Nebraska. It’s sort of a bragging right to be the best team in the state, so the game’s pretty intense and lots of fun,” senior Liv Putnam said.

Creighton’s newest player, freshman Jacob Epperson, got to take off his redshirt and help with the frontcourt. Epperson took the court for the first time on Jan. 22 in Creighton’s game against Georgetown. His first point in was a dunk and the Pink-Out crowd went wild.

Nebraska basketball is making a comeback this season. Just this past week, the team almost hit the 100-point mark against the Iowa Hawkeyes, another big rival. In a Big Ten Conference game this is the most they have ever scored. The Hawkeyes fell to the Cornhuskers by 14 points.

Creighton and Nebraska basketball have different past seasons, but are both getting ahead this year.

Fans want something to cheer and get excited for. The decision is up to them to wear blue or red. But at the end of the day, Nebraska and Creighton can be happy that they have such devoted fans. 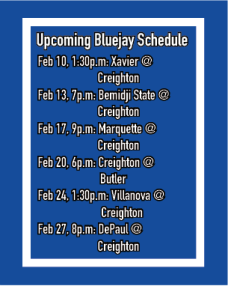