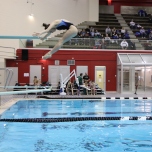 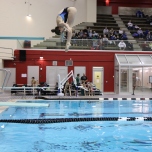 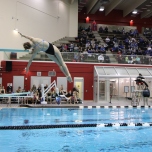 Three girls, soaring their way to state. Literally. The divers on Marian’s Swim and Dive Team are sophomores Claire Hartley and Mariesa Beal and freshman Megan Carter. Each girl had a different start to their diving career, but they all came together to work for a state championship for Marian. The girls compete in both club and high school diving, going to both practices throughout their week.

These divers practice almost every single day of the week, working on either dryland or diving practice. Dryland consists of strengthening their cores, improving balance and working on a trampoline to test out new dives.

“When I started, I thought it would be fun and easy. It is really tough physically and mentally because letting yourself jump off the board is really scary,” Beal said.

Each dive is scored by a group of judges, who are coaches from different schools, depending on who they are competing against. Then, the scores are all added up and multiplied by the number of the degree of difficulty, and that is the score for that round. This is repeated for 11 rounds; whoever earns the most points wins.  “I’m honestly kind of confused, too,” Hartley said when asked about the scoring process.

The divers are coached by Mrs. Becki Carter ’86, who happens to be Megan Carter’s mom. “She isn’t harder on me than the other girls, but it is really weird having my mom as a coach,” Megan said.

Megan’s sister, Taylor Carter ’17, was a diver and now competes at the University of Indiana. Megan’s whole family is involved in the sport. She started diving when she was just 5 years old, and has loved it ever since. “It is fun being in a diving family and it is easy because I can always talk to anyone in my family if I am having a bad practice, and they understand what I am talking about,” Megan said.

Divers Megan and Hartley both have qualified for state. Carter also achieved All-American athlete status through her scores. Diver will compete at Metros on Feb. 9 and State on Feb. 22 at the Bob Devaney Center in Lincoln.

Pictured Above: “Free Fallin’” by Tom Petty Megan Carter ’21 dives in the duel against Lincoln Southwest at the University of Nebraska at Omaha. Carter has achieved All-American status for her performance this season. Photos by Audrey Yost