In its third year of re-emergence, the Society of American Military Engineers (S.A.M.E.) is working to solve problems big and small.

The club, composed of 11 sophomores, juniors and seniors, focuses on finding solutions to issues affecting communities of all shapes and sizes using their STEM and architecture skills. Science teacher Mr. Matthew Winterboer, who has moderated the club for the last three years, described the brainstorming process for their annual S.A.M.E. competition at the University of Nebraska Omaha.

“It was a challenge of identifying a problem locally, nationally or something even broader.  This competition is very open ended.

Teams are responsible for coming up with their own problem that needs a solution,” Winterboer said.

After seeing the devastation caused by Hurricane Irma and Hurricane Maria, the group decided to focus on a way to combat the aftermath of a natural disaster. After months of planning, S.A.M.E. created a school that could be used as a relief center before a hurricane or other natural disaster is set to strike.

Junior Amirtha Arun, who has been a part of the team for the past two years, worked on the health section of the project.

“When a natural disaster happens, people don’t always get access to antibiotics. Alexis Jordan and I worked on the storage of antibiotics,” Arun said.

Along with the health section, other team members worked on areas such as water, architecture, power, communication and research.

“Our team came together really well. It’s definitely a group effort. We all divide the roles pretty evenly. We each have our own subject matter of expertise,” Arun said.

The competition, which was held April 16 at UNO’s Scott Conference Center, was filled with a day of observing other teams, preparing for their presentation and discussing with four engineers and architects the ins and outs of their project.

After a rigorous day of competition, the group won a Top-5 Award of Distinction and a $500 prize.    They won Gold Level Honors in Applied Science, Innovation, Research, Teamwork, Technology, Proposal and Presentation. The only category they earned Silver Level Honor in was Sustainability.

“While it would have been nice to get first place, I’m happy with the way things turned out. We worked hard,” senior DaKara Cooper said.

“Watching students rise to this challenge and push themselves out of their comfort zones to learn and produce a project worth talking about (worth building!) is the main reason I keep involved. It’s my favorite part,” Peterson said. 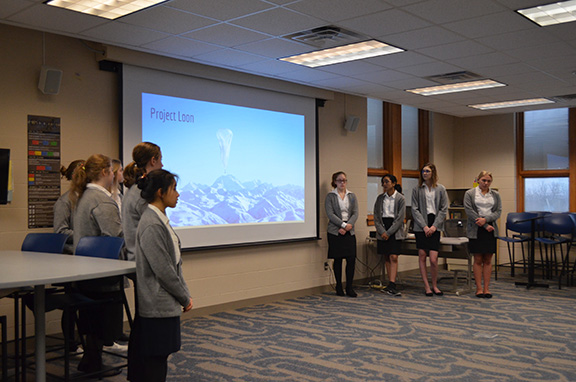 Happy Gnimocemoh Week! Today’s theme: dress like your favorite high school movie character! From Regina George’s mom to “that one extra in that one movie,” Network staffers are sure to win best dressed 🎥 🍿
BEST DAY OF THE MONTH!! The September Network issue is finally out! If you haven’t gotten one yet, swing by room 304 to pick yours up!! For our online followers: stay tuned-stories will be posted online throughout the week!! Big thank you to the staff members for all of their hard work!
Happy birthday to everyone’s favorite staffer!! The Network Staff celebrated Mrs K’s birthday in class while working on this months upcoming issue! Stay tuned for more updates about the Network process 🗞🗞
As we passed down our positions to the juniors today (and played dodgeball against our rival yearbook staff) we have officially ended our year as the Marian Network Newspaper staff. This has been an incredible privilege and we are so grateful we could ~unmask~ Marian throughout this crazy year. Thanks for reading, xoxo the Network 2021 🤍