From William Shakespeare to southern accents, Marian’s spring play had it all.

On April 6, Marian opened its spring play, Shakespeare’s “A Midsummer Night’s Dream.” The show was performed from Friday through Sunday, and audience members enjoyed the comedic talents of the cast. This play was directed by Michael McCandless and starred Marian’s senior Grace Woltemath, junior Mary Watson, and senior Diana Elizalde and Creighton Prep’s Tyler Harris, Isaac White and Caleb Meyers. 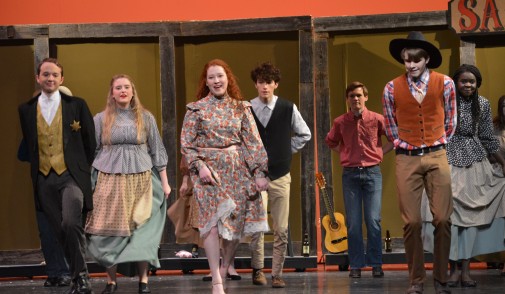 The play required many practices and a ton of time. “We started practices the first week of February, and had practices every Monday through Thursday and Sunday from 4-7 p.m.,” Elizalde, who played Titania said. The cast and crew spent at least 15 hours per week preparing for the show.

The backstage crew also put in countless hours of hard work behind the scenes. From helping with costume changes to moving props on stage, the crew does it all, they even help the boys with makeup. Sophomore Cassie Wolf, a member of crew, said, “I love getting to know everyone on the cast and crew and being with everyone off stage.”

The props and sets are created with the help of various people. Ms. Halli Tripe’s Theater Seminar class, a fine arts class offered at Marian, created the props in the play. Marian art teacher, Mrs. Lindsay Cisco, and former Marian art teacher, Mr. Jeremy Cisco, created the sets for the play along with the help of 10 girls who applied to be set crew members. The props and sets necessary for the play required hard work and time. The members met twice a week for six weeks prior to the play. When the play was finished, they spend five hours just taking apart the set designs and cleaning up.

Although the long hours can feel like eternity, the members of the cast and crew build relationships with people from every grade and make unforgettable memories. “The long hours get to be too much, so having everyone to make you laugh and have a grand time until 11 p.m. is the best part,” Elizalde said. Balancing school and the play can be tough, but somehow, these performers do it. “I have to mentally prepare myself that I won’t get more than 15 hours of sleep this week,” Elizalde said.

The seniors had a show-stopping last performance for Marian. As much fun as the cast and crew had throughout the experience, they were certainly excited to have some free time when the play was over. With a huge success and classical story, “A Midsummer Night’s Dream” was one to remember.