Sixty-five tweets. Three hundred and twenty-four followers. Three friends. Roll it all together and you get one of Marian’s most popular parody Twitter accounts.

The idea to start a social media account featuring memes about daily life at Marian came to senior Isabel Romero in the summer of 2016. She wanted to provide relatable and hilarious content to Marian students, by Marian students. Romero then reserved the username @marianmemes and contacted me and explained the situation. Romero asked me if I would like to help her run the account, and I wholeheartedly agreed.

With the start of school only a few days away, we both set to work on getting the account ready. Our first tweet, posted on Aug. 15, 2016, received two retweets and five likes, all but one of which came from our friends.

Unconcerned about popularity, we plowed ahead, happily sharing jokes about Marian life with whoever followed us. Just as our follower count slowly grew, so did the team itself.

Friend and classmate, Maddie Robertson, heard about the account from us and asked if she could join; she was warmly welcomed and soon began to contribute as well.

Over a year and a half later, the account has brought together not only Marian students but also the friends that run it. All the members—Robertson, Romero and I—are thankful for the impact and opportunity that the tongue-in-cheek tweets have brought us. We hope to pass on the account after we graduate this year; any and all applications would be appreciated. The only requirements are that you are an underclasswoman and have a passion for making people laugh. The account is not officially from Marian, but it does serve as an unofficial public relations tool by interacting with the students online. It is our hope that it will continue with underground leadership, even though we are graduating, for as long as possible.

These were some of our favorite posts… 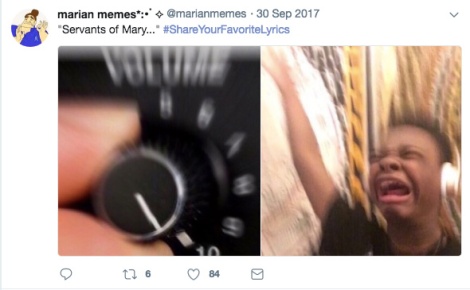 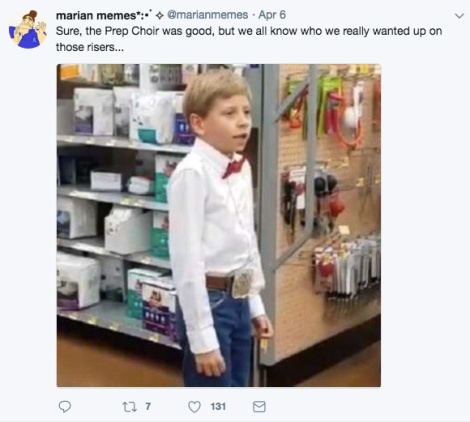 By the time we got around to posting this online, the account posted once more… a senior prank memory and gained a few more followers.  Thanks, Marian!