Marian’s tennis team is working hard to make this season even better than the last. At this point in the season they have lost to  Elkhorn South, won against Burke, lost against Millard West (last year’s state champs), beat Bryan, lost against Papio South, and lost against Lincoln Pius X. The team captains are Emma McClellan and Julia King. King, a junior on varsity, was hard at work training during the off season, and said her game has changed greatly since freshman year. “I have been state runner up both my freshman and sophomore years, and have been first team all state both years as well,” King said. This year she has hopes to be the state champion. She said her favorite part about playing tennis at Marian, though, is being able to be a part of a team. “It has also been really fun to get to know girls from different classes,” she said. 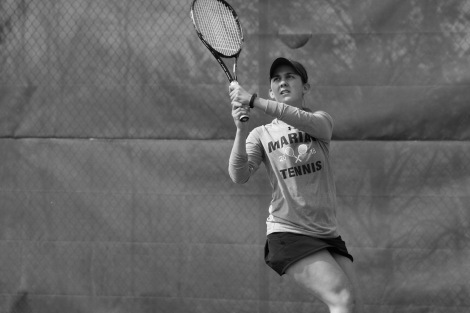 The team’s coach, Mrs. Beth Dye, said she has enjoyed seeing the girls improve their game and grow as friends. She said, “This year’s varsity team is more athletic and buying into the team concept to make each other better every day.” There are four sophomores, three juniors, and one senior on the team this year. Senior Anna Cook said she is excited to see her team develop over this year and next year, and the camaraderie of Marian’s small teams makes bonding all the more important. It is Cook’s last year at Marian and on the team. “I’ll miss my teammates the most. They make playing tennis worth it,” she said. Nonetheless, the season is not over yet. They will play Westside, Millard North, and Duchesne before Metros. After Metros, the team will prepare for Districts, and then finally, the State matches. There is no doubt that the Marian tennis team will continue to prove their talent and sportsmanship for the remainder of the season.