You wake up from a hand-wound alarm clock, not from a catchy ringtone on your iPhone. You check the mailbox at the curb in front of your house for handwritten letters from friends, not text messages, emails or snapchats. News of the day will arrive in the newspaper or on one of only the three main channels on TV, not 300. The way of life will change dramatically in the years to come. 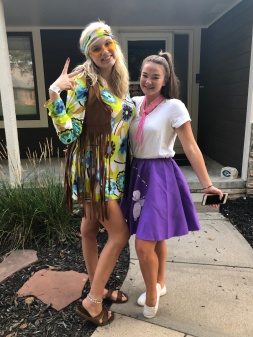 Some people could thrive in a different time period if given the chance. Many Marian students said they would want to live in either the 1920s, 60s, or 70s. Sophomore Katie Corpuz mentioned how she would prefer to live in the 20s. She appreciates that the era was so joyful due to the celebration of the end of World War l.

Corpuz also added, “The 13th Amendment was passed granting women with the right to vote, and strides were being made towards equality; the first feminist movements.”

Lauren Hacker, a junior, felt the same way. “I would miss having basic women’s rights. We still have a long way to go but back then women could not do anything for themselves.” Marian seems to influence girls to have appreciation for women’s rights and equal freedoms.

The 1960s was another popular time period that numerous people chose. Freshman Ryan Sully said she would want to live during this time because they wore fun clothes and had funky hair styles. She also mentioned that it would be exciting to experience the news of the first man on the moon.

Chloe Eminger, a junior, agreed that she would want to live then for the fashion, but also the music. “I appreciate how the music is so upbeat and happy. It puts me in a good mood.”

Advancements made leading up to the present have caused more convenience for communication and entertainment, making the thought of living without it almost impossible. It’s a way to connect with people and makes staying in touch much easier. However, every student who was asked this very question about living in the past said they would not miss the usefulness of technology.

Junior Emma Garriott said confidently, “I wouldn’t miss technology. I feel like it limits our social interaction between friends and family. We depend on it to communicate with people and then show less effort to spend time with them in person.”

Similarly, Corpuz said that she would prefer letters on real paper with real handwriting. An end to the use of social media is a popular opinion because with it, there’s less effort to actually spend time with the people we are close to. At the same time, many mentioned they would slightly still long for the use of smartphones again if they didn’t have them in order to communicate with people they wouldn’t normally talk to.

Most people prefer the simpler times before technology changed the way they interact, and when culture was different through clothes, pop culture, and the environment. However, it is hard to comprehend the value of everything they have today, especially if somehow it was taken away.