Marian’s annual Father-Daughter Mass and breakfast took place at the UNO Scott Conference Center. The theme of Mass was “Guiding Encouragement,” which goes along with Campus Ministry’s overall theme for the year of Guide. Mass, presided by Fr. Charlie O’Rourke, started off with a heartfelt opening by senior Lexi Schorg and her father, Dan Schorg. Both Schorg and her dad talked about the special bond they share as a father-daughter duo and the impact Marian has had on their relationship. 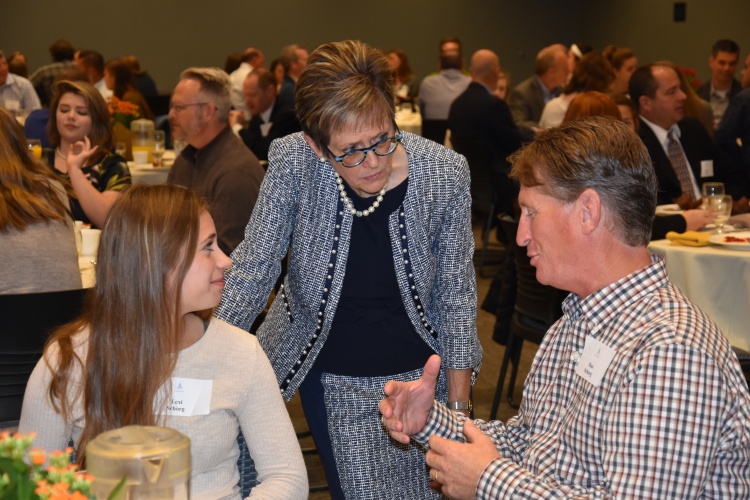 “My dad and I have a close relationship, and I consider him my best friend. Being able to share my love and appreciation for all that my dad does in front of everyone was special,” Schorg said. Her opening speech was followed by her dad’s response, which meant a lot to him as well because of how proud he is of his daughter.

“It’s not often that one gets to hear the impact they’ve had on their daughter’s life. I was fortunate enough to hear that I was my daughter’s hero, little did she know she’s been my hero all along,” Mr. Schorg said. The Schorgs aren’t the only the Father-Daughter duo who had a memorable time at the event. Many others did too, including freshman Emily Kriener, who attended with her grandfather. “My favorite part was the speech by the senior [Lexi Schorg] about her dad because I thought of all the ways that my dad and grandfather were special to me,” Kriener said.

After the introductory speech and Mass, Campus Ministry played a slideshow FIAT core team member Anna Feldman put together, with photos submitted by students and their fathers. The slideshow consisted of pictures of father daughter duos back when they were both younger, along with recent pictures. Some girls chose to put goofy pictures up, while others chose more heartfelt moments. A brunch then followed, which consisted of different scones, muffins, eggs, bacon and other breakfast foods. Throughout the whole event, Marian girls and their guests were able to bond and create new memories. As the oldest of six, freshman Cali D’Agosto was just one of the attendees who was glad to be able to spend some time with her dad. “We both got to joke around and enjoyed participating in a Marian tradition together! It was really cool to see him get filled with pride whenever someone mentioned the impact Marian made on girls,” D’Agosto said.

The Marian Father-Daughter Mass and Breakfast is an event that happens every year. Although this is a recurring tradition, this year was full of different speakers with personable memories, new stories and even more laughs.