“Can you believe I looked like that,” “OMG what was I thinking,” “I’m so happy I changed,” are statements people express while looking through their high school yearbook, but how many people have actually changed  throughout school.

Junior year is considered by many to be the hardest year in high school due to the PSAT and ACT, and many juniors are stuck between thinking about the future while trying to maintain the present. So, in the midst of junior year, how has high school really changed people? 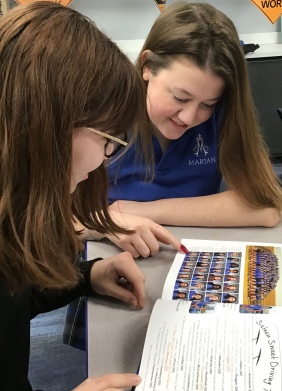 Different grades bring along different changes, but many people find themselves changing in the same way. During freshman year, many girls said that they were shy and just trying to get the hang of things. Junior Alida Farrens expressed how fear followed her into freshman year. “I was super nervous and afraid to talk to people, and I was afraid to meet new people, and I was scared of upperclassmen.”

After freshman year people felt more comfortable with Marian, but that does not always mean their lives immediately improved. One girl described her sophomore year as horrible, not because of Marian, but because of her life outside the halls. But, many people expressed a more positive outlook on sophomore year; they met new people, and reached outside their comfort zone.

Coming upon junior year, several girl express how they are more carefree and less self conscious because they have grown with the people surrounding them. Junior year so far has affected people positively, but many expressed how friendships are getting harder to maintain and life is getting rougher.

One girl expressed how Marian affected her negatively, it made her too trustworthy. She explained: “Marian taught me to trust people way too much like with leaving my belongings around the school, because anywhere else my things would have been stolen.”

Some changes that happen in life are not always positive, and many girls stated that Marian itself has not always changed them positively. Marian has seemed to be the cause of many stressed out girls even when they are outside of the halls.

But, positive change is also something that can undoubtedly happen throughout Marian. Several girls believe Marian has improved them as a student. One girl stated: “I’m more focused in school and I actually learn stuff, and I don’t just have to memorize it for a test.”

Different grades affected people in ways that shaped them to be who they are today. Many people said sophomore year changed them the most because of the people they met, and how they started to get into the groove of things.

High school can change people, but while you’re in school, it may be hard to see how you change. High school shapes you in a way that could follow you throughout your life, and reflecting on those changes can improve you as a person.