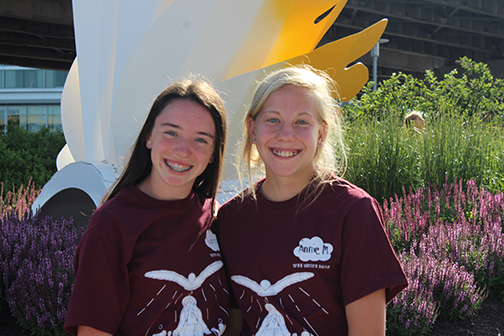 On June 8, 2019, what Omaha Archbishop George Lucas referred to as a ‘once-in-a-generation event’ took place. Catholics from all around the city of Omaha gathered at the CHI Health Center for a day of celebration, music, prayer, and even a little bit of humor.

Many Omaha teens, including Marian’s own junior Katie Corpuz and sophomores Audrey Van Dyke and Anne Masek volunteered as leaders for the Junior Unite. They split the children into small groups ranging from ages 7-12. The environment was similar to that of a Vacation Bible School: singing, activities, and social interaction.

Throughout the day, the children went to different stations including journaling and adoration. “One of my favorite parts of the day was when we got to experience adoration with the little kids. I thought it was really cool how the kids were able to listen to God,” Van Dyke said.

Instead of traditional journaling, the leaders generated a question which the children responded to through drawings. When asked “How do you think God loves you?” the kids of Junior Unite drew hearts, suns, and images of their families standing with Jesus.

After a long day of activities, the children moved to their final event of the day known as the ‘Pentecost Party’. A change of pace took place from adoration to journaling, and the kids were able to sing songs and have a youthful dance party. Corpuz described this as a “rewarding experience…to see them realize at a young age that, hey, there could be a God, and he loves you.”

The leaders’ time with the children served as a very fulfilling series of moments, leaving them with happy hearts. “Although Anne and I were helping with the little kids, we were able to get just as much out of this experience as the children did,” Van Dyke said.

Once the Junior Unite went home, comedian, actor and author Jim Gaffigan provided a dose of laughter for the remaining adults and leaders. Gaffigan is a midwestern Catholic and father of five children. He incorporated a ‘clean’ comedy show to insert some light-hearted fun into the long, faith-focused day.

Afterwards, the largest Mass in Omaha history took place. More than 12,000 teens and adults enjoyed a Pentecost Mass, featuring an orchestra and traditional choir. Every priest and deacon from the Omaha Archdiocese was present. “It was so powerful to see everyone in that center celebrating mass, it really felt unified like the event was called: ArchOmaha Unite,” Masek said.

The ArchOmaha Unite event was beyond memorable for each individual involved. Through interactive prayer and celebration, Omaha Catholics were able to establish a sense of unity like never before. From the many supporters who funded this event, to the hundreds of volunteers it took to make this day come to life, Archbishop Lucas and Catholics from the Archdiocese left this experience with grateful hearts.

yearbook huddle🫶🫶
Happy special birthday Mr. Koesters!
ATTENTION MARIAN GIRLS!!!!! Tomorrow is an important day: CLUB PICTURE DAY! Club pictures start at 7:20 in the west gym (small gym). This is such a fun opportunity to get in pictures that will be on the club spreads in the yearbook! AND also it is STUBOS pancake breakfast that starts around 7:30. It is cash only and all proceeds go to the Ronald McDonald House! SOOOO go take your club pictures then stop by to get a pancake<3
OCTOBER YEARBOOK PHOTO DUMP!! October was full of softball winning state and volleyball winning districts (taking on state tonight) while supported by the dance team, the cheer team, and the Marian student section! We also had our very popular Beauty and the Beast Musical that sold out every night! On top of all of that we had our father daughter mass and Gnimocemoh, which was full of costumes, games, and dances!