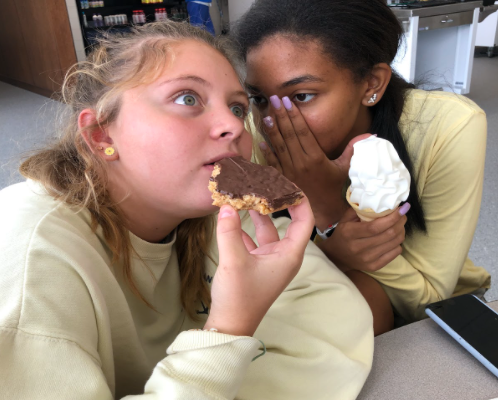 Rumors spread quickly during the month of September in the hallways of Marian. This competitive, student-led Walk-A-Thon fundraiser leads to a lot of chatter around the school. These so-called “rumors” are started for many different reasons, bringing about the competitive energy at Marian.

“Rumors are started to spread to other grades successfully and to get a reaction out of people,”  junior Ashlee Czyz said. Girls will do anything to win, even if it means making up fake stories.

“I motivate my class to bring in more money by telling them other classes are winning,” junior Eden Opiyo said.

The fear of losing Walk-A-Thon impacts Field Day, one of the most cherished and competitive events at Marian. A wide number of rumors were spread around the school, proven to be untrue.

“I heard a rumor that a junior’s grandparent accidentally donated a large amount of money to the sophomore class, ” junior Molly Monahan said.

Student Board co-moderator, Ms. Jessica Abel, stated that this rumor is false.

“Juniors and seniors tied at 122 percent of their final goal, ” junior Lexxi Olsen heard. This rumor came to be proven as untrue as well. The final results were juniors reaching 137 percent of their goal and senior class reaching 147 percent of theirs. Abel said she heard this rumor spread before they were even done counting the money. Despite all of these rumors, the results came out to be seniors, sophomores, juniors, and freshmen placing in that order.

The true spirit of Walk-A-Thon is about raising money as a class to benefit tuition assistance. The competitive energy of Marian girls can lead to rumors and untrue stories in order to win.

“Starting Walk-A-Thon rumors is never a good idea because we all love competition, but being unified as a school is so important,” sophomore Annie Ellerbeck said.