The PSAT is administered to high schoolers each year and it initiates the competition for the National Merit Scholarship program. Approximately 1.6 million high schoolers are entered in the contest each year. Registration is automatic through taking the PSAT, which the junior class just took on Oct. 16, which begins their competition, while the freshman and sophomore classes take practice tests on the same date. The results of the competition are revealed in the following school year, typically in early fall, though the final results are revealed in the spring.

Out of all the students that take the exam, the highest scoring 50,000 (or top 3 percent) test takers are rewarded for their scores, and 34,000 are recommended as commended scholars. The top 16,000, including 114 seniors from Nebraska, are recognized as semifinalists, including senior Tayla McWilliams.

“The competition is rewarding,” McWilliams said, “Especially because I actually enjoy taking tests like these.” As the competition continues, the remaining 15,000 students are named finalists and are rewarded with a certificate of merit. The rest of the 50,000 scorers are commended scholars and finish their journey in the contest there, such as senior Sophie Clark.

The further you proceed in the competition, the more scholarships and opportunities present themselves, totaling up to $31 million. 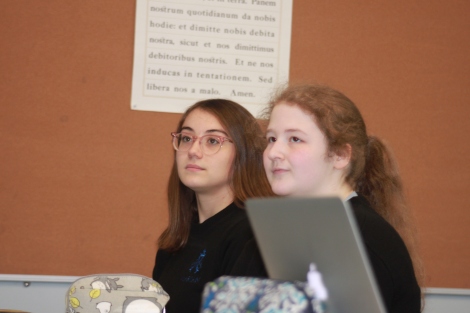 Is a hotdog a sandwich?

Sophie: A hot dog is a taco

What came first, the chicken or the egg?

Favorite song to sing in the shower?

Tayla: “How Will I Know” Whitney Houston

Sophie: “She Used To Be Mine” from Waitress

What is your favorite kitchen utensil?

What mythical creature would you be, why?

Tayla: A dragon, no explanation necessary