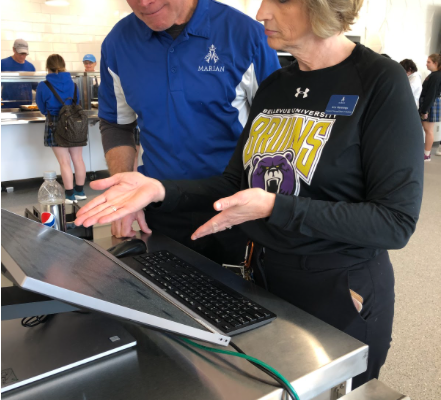 Hennings’ morning begins at 7 a.m. with front office work. That  includes monitoring people who come into the building and depositing lunch money. She then moves on to logging discipline points from the previous day, sending out 6-point letters, and assigning Saturday school for those students with 10 points.

Towards the middle of the day Hennings does lunch duty and passes out the cleaning rags to sanitize the table and monitors the lunchroom activities. Once her set duties are done, Hennings does whatever else needs to be acomplished; meeting with students about upcoming events is one of the more common tasks.

Hennings claims that her most time consuming activity is monitoring work study before and after school. She said, “[I am] constantly checking if kids are in the room or doing things they are supposed to be doing and following up with them.” This task  also involves a lot of checking emails from teachers about making sure everything was done correctly.

Along with all of Hennings’ daily responsibilities, her favorite part of her day is being able to get into the classroom to get a better sense of how that operates. The best part of her day, however, is going down to the Performing Arts Center (PAC). Hennings said, “I love going down to the PAC and just watching the kids. They were practicing duet acting the other day, so that was fun to see them.”

Hennings also expressed how different it is working at an all-girls school. Coming from her previous job as an assistant principal for five years at a coed school in Hastings, Nebr., she wasn’t expecting the level of maturity here. Hennings said, “The level of self-control. That is the whole difference between private and public schools.” It made her realize that she was going to have to discipline girls for a lot of different things than she’s done before.

Although her job entails a lot of discipline, she also strives to better the lives of students everywhere. One of Henning’s main focuses is increasing diversity in high schools. Here at Marian, she works extensively with the IDEAS club. She also heavily focuses on the current vaping issues in high schools.

The Dean of Students does a lot more than the average student would realize. Hennings’ job is more than catching uniform violations or managing points. She strives to make the school run smoothly and make sure jobs get done.

MEET THE STAFF! Maddia and Ella are the two main editors for the Marian yearbook, and Nina and Maggie are the main editors for the Marian Network! They are the boss ladies in charge and the people to go to when you need help!
Today Yearbook is taking on Walsworth Journalism Camp! We are all SUPER EXCITED to learn about how we can make our yearbook amazing!!! 🥳🥳
MEET THE STAFF! Megan is the online editor for the yearbook, and Kyra is the online editor for the network! We both create the google surveys and run the mhs.pub instagram account. Kyra manages the online digital network, and Megan is also the graphics editor for the yearbook. We are both super excited for the rest of the year! 💚
HAPPY BIRTHDAY to the one and only MRS. K!!!! Mrs. K runs our journalism, yearbook, and network at Marian. She keeps us all in line and helps us when indesign gets the best of us. She is truly amazing working the behind the scenes along side us all. If you have the chance come to room 304 and tell Mrs. K to have an amazing birthday she deserves it!!!!🫶🫶🥳🥳🥳