Choosing a college can be a stressful, and sometimes seemingly impossible climb for many high school students. Picking a major, staying in state or leaving, and many more decisions are thrown at high school students when some barely know when they’ll make time for homework. To combat with this stress, Mr. Nick Miller, a Chemistry teacher at Marian, is helping his students early on with “Skype a Scientist.”

“Skype a Scientist” is a website where teachers can match and Skype with a number of scientists across the United States. They can share information about their daily life, job, college experience, and much more. All a teacher has to do is request a type of scientist and they are matched with one within the day. Miller, though, lets his students request the type of scientist to Skype with. The most common type the students choose is a marine biologist, but there have been many more types scattered in the mix.

When most people think of students deciding about college, they think of seniors, but the sophomores in Miller’s classes also get the opportunity to chat with a scientist about their career path. 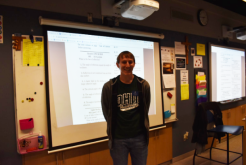 “I think that around sophomore year you start to get those questions like ‘What college are you going to?’ ‘What are you going to major in?’ and it’s really hard to make that decision at that point in your life.” said Miller, who always introduces his classes to the scientist they are paired with to know what kind of questions to expect.

First, each class sits down facing the scientist they chose to optimize the teaching affect and receives an introduction. This can include what they do every day at their job, how they spend time with family, and sometimes even a PowerPoint the scientist has prepared. Then the questions begin to roll in. “Each session is very informal,” Miller said. “they just go back and forth with questions and answers for a while.”

Miller brought this to Marian to give the girls an early glimpse of what to expect when they start applying for college. “It seems like there’s this idea that you pick your major, you pick your college, you go through that, you graduate, and then you go work at the kind of career you majored in, and I don’t think that’s the case for the vast majority of people.” Miller changed his major twice in college, and was at first an insect science major, which is definitely not the case now. “I try to get the scientists to talk about the fact that you don’t have to pick what you’re doing for the rest of your life right now.”

He said he always encourages the classes to ask about why the scientist chose to be in the field they are in or the thought process they went through in choosing their college and major. “I think it’s good for everyone to hear that most people change their majors,” Miller said. “It is interesting to hear though, that some of the scientists will say, ‘Oh, I did this project in middle school and I knew what I wanted to be’… But for others they got a degree in animal science, and now they’re working as a physicist or a neuroscientist.”

The main concept he wants his students to take away from the experience is that your college major or what colleges you apply to won’t affect you for the rest of your life. Erin Connelly, a sophomore in one of Miller’s chemistry classes, says that the session was very interesting, and helped her understand the process of choosing a major. “It was really cool to hear from someone who had been through the process and succeeded in the area they chose.” She thought the marine biologist they spoke to gave “insightful hints” into choosing a major that wasn’t based around just one thing.

A scientist that one of his classes spoke to this year didn’t get into her top choice for college, and at the time that was really disappointing for her, but now she is a marine biologist with a PHD. “Just because you don’t get into your top college choice, doesn’t mean you can’t do what you want to do with your life.” Miller keeps encouraging his students to start thinking about college early, but succeeds in letting them know that there is no pressure in committing to your future, which is yet unknown.