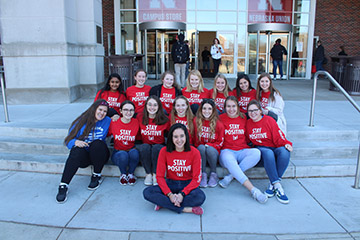 Marian Mathletics is a recently popular activity. The Math Club consists of 62 girls and 19-24 girls compete at math competitions.

“Math Club became popular in its first year, 2017, because of the girls who organized it. They were so enthusiastic about having a lot of great events that it just really took off and has been quite successful since then,” Ms. Megan Han, Math Club moderator and math teacher, said.“I credit its popularity to a stream of great leaders. All of these ladies have such a fervor for mathematics and are devoted to spreading the excitement to other students.”

“As president, I help organize meetings, setup the Pi Bake Sale, and help prepare for the Middle School Math Contest,” Malick said, “Our future plans include more meetings about binary numbers and other fascinating math topics. We will probably have a Christmas Math Party. In February, we host a Math Contest for local middle schoolers [which is] only girls of course.”

Marian Mathletes are excelling in competitions. They placed fifth at the UNL Math Day Contest out of 17 teams in 2018. Alum Abby McGill ’19 placed 79 (top 5.8 percent) and senior Emma Johnson placed 138 (top 10.1 percent) out of 1,358 in the individual test. The team of Liske, McGill and Malick competed in the bowl competition, and they defeated the team from Platteview.

This year, Marian placed 17 out of 32 teams overall at the UNO Math Day Competition. Marian placed first in the Data Analysis portion of the competition. Liske and junior Gracie Kerr finished in the top 18 percent of 357 students. Senior Daisy Owen and freshman Elizabeth Foreman were top finishers in their grade divisions on the individual test.

However, prepping for and competing in math competitions aren’t the only things Math Club is doing. They meet to talk about interesting math topics and how math is applied in the real world to solve real-life problems.

“One of my favorite memories is when we had a Math Club meeting to talk about social choice theory. Mr. Baker and I collaborated on this presentation. He addressed voting issues from a social studies standpoint, and I talked about the mathematical consequences and paradoxes that occur with different methods of voting. It was a really unique way of showing how two seemingly different areas of study could be so intertwined,” Han said.

“I like being in Math Club because we have fun meetings with Miss Han about interesting math topics.  We talk about binary numbers, election outcomes, and cryptography.  We get really cool T-shirts and have the opportunity to participate in two math competitions every year,” Malick said.

“My favorite memory of Math Club is going to UNL Math Day three years in a row.  We take a bus to Lincoln, take a math test, get lunch from the dining hall, and cheer on our quiz bowl team. It was really exciting when a freshman, Elizabeth Foreman, placed out of more than 1,000 high school students,” Malick said.

Marian’s Mathletic team is continuing to plan more exciting events, and they are always open to new members.