Whether it’s early morning practice, or a late night game, Marian’s dance teams are always ready to perform. The varsity team is instructed by head coach Kelli Butler and assistant coach Chelsea Vorland, and the JV team is coached by coach Sienna Scott. Varsity and JV dance teams practice together on Mondays after school and Thursdays before school where they warm up and work on the routines they are getting ready to perform. 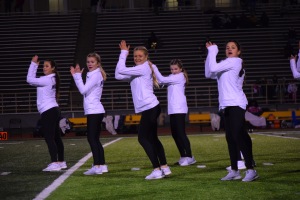 “We’re really focusing on cleaning the dances and making them performance-ready for the basketball games,” sophomore Kenz Anderson, a member

of the JV team, said. “The dances we 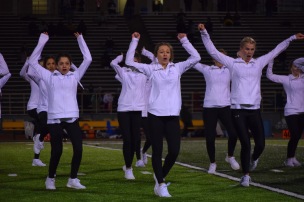 Put Your Hands Up • Clad in their warm-ups , the dance team boogies on the 50-yard line at a Creighton Prep football game. The team also performs at Mount Michael basketball games and at Marian pep rallies and basketball games. Photos by Chloe Herbert.

usually do are from a camp that the dance team goes to over the summer…other dances are created by the coaches. This year, the returning JV members got to create a dance for JV which was so much fun!”

Besides pep rallies, the team will dance for at least three home Marian basketball halftimes. Despite the lack of Marian-specific opportunities, the dance team still has a busy schedule. The team performs at many Creighton Prep football and basketball games and Mount Michael basketball games. They also dance at the Universal Dance Association summer camp, the Millard North showcase, the state competition in Grand Island and the Universal Dance Association nationals in Florida.

“Performing for the boys’ schools can be disappointing if they don’t cheer or hype us up, but it’s fun to perform for a different type of crowd,” senior Adrianna Krueger, a member of the varsity dance team said, “That’s why performing at football games is most of the team’s favorite tradition.”

Although dancing at football games, basketball games and dance competitions is fun, members of the dance team wish there were more opportunities to dance for the Marian community.

“I wish we could do Marian soccer games; that would be really fun,” Anderson said.

“We like performing at Marian events and wish we did more, so that other students could see what we are up to,” Krueger said.

Congrats to the Marian Network staff for winning multiple Excellents and Honorable Mentions from the JEA High School Journalism Competition!⭐️
secret santa with the network! 🎁 merry christmas and happy holidays! 🎄
congrats to Marian’s BURN literary magazine for a successful showcase on Tuesday evening! be sure to pick up a magazine either in homeroom or in the journalism room!
congratulations to jasmine buttler, holly mccutcheon, colleen sully, maggie timmerman and daisy owen for receiving honorable mention and maggie mantini and emori hamilton for receiving excellent at the JEA writing contests in Washington, DC!