The construction at Marian may seem like it’s finished, but that’s not exactly the case. A new athletic annex, located underneath the Haddix Academic Center, is still in the works. It will be located behind the concession stand, beyond the north windows of rooms 112 and 114.

The main function of this new addition will be “to increase space for physical education, teams, coaches and classes,” Ms. Rochelle Rohlfs, Athletic Director and Assistant Principal, said. 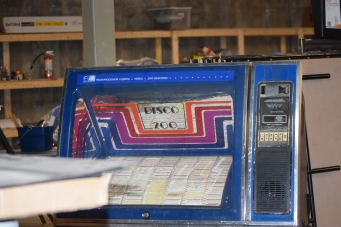 Mystery Solved • Many didn’t know where Marian’s iconic jukebox had disappeared to this year, without its presence in the cafeteria. The broken jukebox is currently in storage underneath the Haddix Academic Center, the future athletic annex. Photo by Olivia Sullivan.

“I am excited for the project. I don’t foresee much of an impact on my classes in room 112, but who knows. I actually do not mind the construction all that much. I have taught in a variety of different situations, some better than others, and as a teacher, my goal remains the same no matter what, ” Mr. Tim Barth, science teacher, said.

“It’s going to include a third locker room, for when we are hosting events, there are sometimes more than just two teams that need a locker room,” Rohlfs said. “It will have a coaches’ office; we have a lot of coaches that don’t work here and when they come in, they have nowhere to put their stuff or work from.”

“It will have a media room, where teams can watch films for games and scout teams. That can also be doubled up as a classroom for wellness classes,” Rohlfs said. Right now, wellness classes are taught in classrooms on the first floor, when they are open for teacher’s plan periods. “All of our P.E. classes have increased in size,” Rohlfs said.

“It will have a men’s and women’s coaches and officials bathroom,” Rohlfs said. Currently, Marian has a single restroom near the athletic trainer’s office. The need for a more inclusive option stems mainly from when events use both male and female officials.

A start date has yet to be announced, but it’s safe to say that sometime second semester construction will begin. “Mrs. Higgins and I are working diligently on coming up with a start date. We are in the final phases of the design phase,” Rohlfs said.

“I would hope that it would be a three to four month process,” Rohlfs said. Although they are still waiting on a cost estimate from MCL Construction, the annex will be funded with donations. “Some donations have been acquired and Advancement continues to work on those,” Rohlfs said.

Similar to the Haddix Academic Center, the athletic annex will be named after someone. “The announcements of the name will be at a later date,” Rohlfs said.

Right now, the space is just being used for storage, but new spaces will be coming soon.