One day my grandma called me and asked if I wanted to go see “Knives Out.” Not knowing what it was about, I agreed to go with her. Going into the movie I had no expectations. However, right from the opening scene I was intrigued. The cast did such an excellent job playing a dysfunctional family that they could almost pass for a real one. Ana de Armas, was especially convincing in her role as young nurse, Marta Cabrera. She accidentally gives her patient, Harlan Thrombey (Christopher Plummer) the wrong medicine and he dies of an overdose. The whole movie Marta is avoiding being caught while simultaneously dealing with Harlan’s crazy family.

This movie can currently be seen in theaters. After it is not in theatres anymore, it will most likely come in DVD form and be available to rent. As of now, it is available to preorder on Amazon for $19.99.

The story as a whole had many surprising turns, catering to all audiences. It was not scary, as judging by the title I thought it would be. Although it is rated PG- 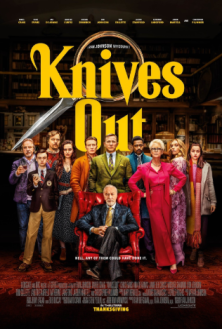 13, I believe this movie would suit children of a slightly younger age, as there is not really any violence or profanity. My one complaint is the humor of the movie. It had moments of comedy but they were brief. The cast was phenomenal and had the potential to portray a dysfunctional family with more humor. No it was not a comedy but several characters, like Ransom Drysdale (Chris Evans), were there for comedic relief and I wish they would have used their senses of humor a little more.

surprising ending and kept me on the edge of my seat while catering to most audiences. I recommend this movie to be seen with family because it is likely that most family members will like it. It scored 97% Rotten Tomatoes and provides a great movie for everyone.