New restaurants can be a scary place for some because they offer a new atmosphere, cuisine and are sometimes in a different “bubble.” Over the winter holiday, my family and I decided to take on this task.

The search was difficult, but we finally settled on Pan Asian Terrace, which is located right off of 156th and Pacific Street, with many other restaurants and boutiques around it. This location makes the parking lot a bit crowded with all the establishments sharing one lot. There is no outside seating available, but it is a handicap-accessible restaurant with marked parking spots and no stairs to get to the door.

There is no need to make a reservation, but their busiest time is around 5:30 p.m. on weekdays, which is when my family went. My family of four had no problem getting a table. Their specific hours vary day-to-day, but in general, Pan Asian Terrace is open for lunch and dinner all week.

While not looking like the busiest place inside the restaurant, there were a lot of people going in and out of the restaurant for takeout. While we were eating, there were about seven or eight people that walked in to get their to-go orders. Takeout seems to makes up a majority of their business.

The general ambiance is a casual, family restaurant that offers Asian fusion cuisine. It has Chinese, Vietnamese and Thai food all in one menu. There is no dress code, so it is casual. The restaurant looks appealing and modern with a bar for to-go orders and multi-level seating for diners with ambient lighting. It didn’t smell and was very clean. There were paintings and pictures hanging that emphasized the Asian culture. There was no music playing, but that didn’t affect the general tone of the restaurant. I would also point out that the bathroom was clean, too.

My family was quickly seated by a hostess and someone followed to fill the water glasses on the table. The service was great overall. We had an attentive waiter who periodically asked if we needed anything and how our food was. Our server was also particularly funny and was cracking jokes throughout dinner. 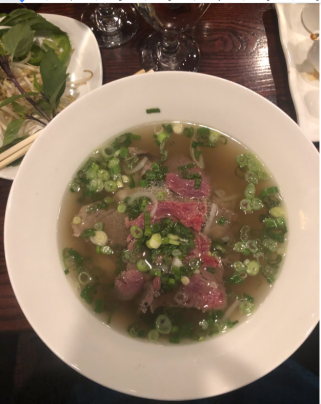 This is what pho typically looks like! Photo by Olivia Turkel

I ordered the rare beef and brisket pho, which is a noodle soup that originated in Vietnam. I have to say it was really good for this being an Asian fusion restaurant. I am a harsh critic when it comes to pho, since I have had authentic pho straight out of Vietnam, but I have to admit that it met all of my expectations for what a hearty bowl of pho should be. It was hot, had a rich beef flavor, and properly cooked noodles. I was very satisfied with my meal.

The overall cost varies a lot. Some dishes are on the higher side for Asian food, but the portions are huge. For example, my mom’s dish was $16.95 but had plenty of leftovers for the next day, while my soup was only $11.95 for a ginormous bowl.

I give Pan Asian Terrace a 3.75 out of 5 stars. It was an average Asian fusion restaurant that had good food with an appealing ambiance. However, there was nothing that shocked or surprised me. I will, however, add this restaurant to my rotating list of places to find good pho in Omaha.