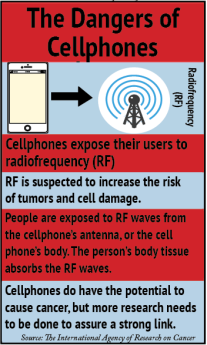 There is one item that is almost always guaranteed to be carried by a person, whether they’re male or female; young or old, and that item is a cellphone.

These hand held devices seemed like a cure-all to many problems such as communication, sharing with friends across the world and streaming favorite shows or music, but they may be more dangerous than one may think.

Cellphones expose their users to radiofrequency, which is a form of electromagnetic radiation. According to Cancer.org, radiofrequency is suspected to increase the risk of tumors and cell damage.

Women may be more at risk for these health problems, depending on where they store their phones. It is assumed that if someone puts their phone in their bra, that they are more susceptible to these risks, as well as breast cancer.

According to Cancer.org, there are several factors that can contribute to the amount of radiofrequency waves the body may be exposed to, such as the time spent on the phone, the amount of phone usage over a network and the type of phone used.

The results from scientific studies, such as the U.S. National Toxicology Program’s experiment in 2018, show that radiofrequency waves from cellphones don’t give off enough energy to severely damage the DNA or heat body tissues.

In one study, a group of rats were exposed to radiofrequency waves over their entire bodies for nine hours a day for two years, which is about 70 human years.

The experiment resulted in an increased risk of heart tumors, malignant schwannomas (cancerous tumors in the sarcoma tissue) and possible increased risks of brain and adrenal gland tumors.

Breast cancer radiologist Dr. Katie Mendlick said about the lack of information, “there are no studies that really prove a definite association between cancer or breast cancer risk and cellphones. However, more studies probably need to and will be performed. Cellphones do emit electromagnetic radiation.”

“In 2011, the World Health Organization said cellphones are ‘possibly carcinogenic’ based on limited evidence and inconclusive studies,” Mendlick said.

“It is possible that electromagnetic radiation can emit a cellular change which can ultimately lead to cancers, but many studies contain bias. The evidence is not strong enough and needs to be investigated further,” Mendlick said.

No matter the experiment, there is usually the same conclusion: cellphones do have the potential for health risks but research needs to be done to assure a strong link.

Happy Spring Break!💐🌿🌸 We hope you enjoyed the February/March Network!
Congrats to the Marian Network staff for winning multiple Excellents and Honorable Mentions from the JEA High School Journalism Competition!⭐️
secret santa with the network! 🎁 merry christmas and happy holidays! 🎄
congrats to Marian’s BURN literary magazine for a successful showcase on Tuesday evening! be sure to pick up a magazine either in homeroom or in the journalism room!