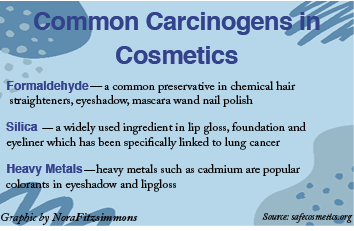 Reprinted from the January Network, page 3

According to the January Network survey, 43 percent of 251 Marian girls who responded have dyed their hair. A recent study called the Sister Study found that there may be a link between permanent hair dye and chemical hair straighteners and cancer.

This link has been found to be especially prevalent among African American women. Researchers found that women who use these hair products have a higher risk of developing breast cancer, according to Patti Neighmond of NPR.

The study’s author, Alexandra White, noted that white women who used permanent hair dyes were seven percent more likely to develop breast cancer while African American women had a 45 percent risk. The specific chemicals that increased this risk are unknown, but hair dyes contain more than 5,000 different chemicals according to the researchers.

Even the thought of researching all of the different chemicals in these products can be overwhelming. Sophomore Christina Tinley said, “I probably wouldn’t [research the ingredients] because there are so many chemicals that it would take me forever to research all of them.”

She understands that you take a risk when you dye you hair with chemical dyes and thinks one should just “accept the fact that your hair is going to be damaged.”

Chemical hair straighteners affected white and black women with the same risk, but African American women were more likely to use the product. A chemical in a popular form of hair straightener called Brazilian Blowout contains a known carcinogen called formaldehyde.

While these study results seem scary, one must keep the risks caused by hair dyes and chemical straighteners in perspective. According to the American Cancer Society, people who regularly work with hair dyes and straighteners such as hairdressers and barbers should be worried about the risk of cancer from these products, even more so than the average person.

The Sister Study is also one of the many studies investigating the potential ties between cancer and permanent hair dyes or chemical straighteners. While some studies also claim there is a relation between the two, there are many others that have inconclusive results.

The results of the Sister Study shouldn’t completely scare people away from using permanent dyes or chemical straighteners, but it is an important reminder that consumers should always look into the ingredients of the products they use.