Marian’s debate team has been on and off for decades, but right now, it is in its prime.

“This is our second year of the debate team since I’ve been here,” debate coach Ms. Halli Tripe said.

Tripe is also the speech team coach, but next year she will be stepping down from that position to coach only debate.

“Coaching both speech and debate was stretching me a little too thin. I needed some more time in my life for me, so I decided to make some cuts,” Tripe said.

The debate team has other coaches that help with certain types of debate. 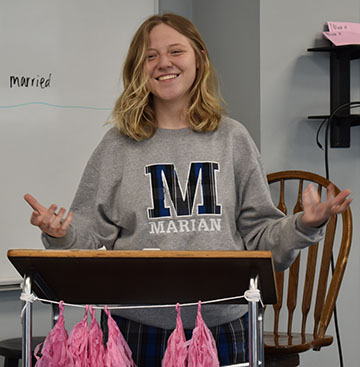 National Debator • Jacquie Smith ’20 practices after school for her role on Public Forum debate.  Her favorite part of debate is “learning new subjects that have to do with our world,” Smith said. Photo by Olivia Sullivan.

“There are four main types of debate,” senior Emily Atamov said. She is in her second year of the program. “There’s Lincoln Douglas, where you talk about philosophy and morals; Policy, where you talk about government policies and getting them passed; Congress, where you act as though you are a part of Congress and debate legislation; and Public Forum, where you debate real world issues that change every month.”

Each type of debate has different practices on different days of the week and tournaments usually on weekends where they debate against a variety of schools in the region. Atamov is on the Varsity Policy team.

The state debate competition was scheduled for March 27 and March 28. Each school could have sent four students to compete in each of the four events. As Speech and Debate are NSAA activities, all formal competition has been suspended through May 1.

The National Speech and Debate Association (NSDA) districts to qualify for nationals for Policy, Lincoln-Douglas and Public Forum were March 6 and March 7.  Nationals were scheduled for Albuquerque this summer and as of March 25, Tripe said that the NSDA national tournament has not yet issued a statement or cancellation.

The NSDA districts to qualify for Congress nationals were scheduled for March 21, but they were also suspended.

Many people join the debate team to learn skills they wouldn’t otherwise learn in their classes.