Omaha native and New York Times photography fellow, Calla Kessler, 23, returned to Nebraska in mid-March. She left her Brooklyn apartment to use her skills as a visual journalist to document the COVID-19 pandemic in the Midwest.

Kessler’s most recent assignment from her editors was to capture the University of Nebraska Medical Center’s (UNMC) response to the shortage of protective medical equipment. The national news outlet was familiar with UNMC because of the center’s work with Ebola back in 2014 and specifically asked Kessler to photograph their efforts to reuse surgical masks by cleaning them with ultraviolet (UV) light. 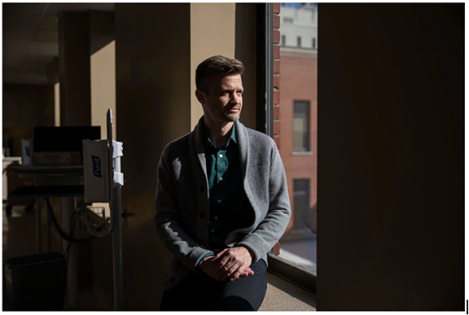 Although the procedure violates established regulations from the Center for Disease Control and Prevention, recently added guidelines from the agency say quote, “as a last resort, it [unapproved masks] may be necessary.” Which includes UNMC’s decontaminated masks.

However, documenting this effort brought challenges. “This may be an example of what it looks like when my editor is in New York and doesn’t know what it looks like on the ground—it can lead to some miscommunication,’” Kessler said after her visit to UNMC on March 20.

The UV lights being used at the medical campus are blinding, almost impossible to look at, and known to cause radiation in the body- which is why Kessler could not be in the room to photograph when the UV lights were turned on. “I didn’t realize I wouldn’t be able to be in the room and that was kind of a surprise,” Kessler said.

She first tried composing the shot from a window and then across the hall, until she decided to set up her camera and cross her fingers. “I would go into the room before they turned the lights on and I would set my camera up on a desk and compose my shot,” said Kessler. “Then I would leave it on a timer and run out of the room. They would start up the UV light, I would wait and eventually go in to check my images.” 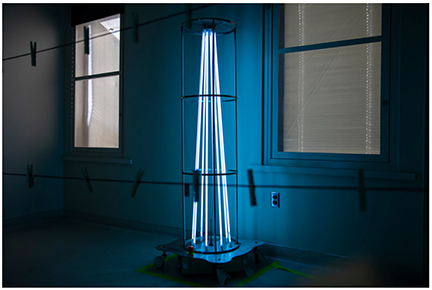 Ultraviolet light is being used to decontaminate medical supplies at the University of Nebraska Medical Center in Omaha. Calla Kessler/The New York Times | Reprinted with permission

For a photojournalist who wanted to deliver, Kessler described the experience as “scary.”

“It was hard not knowing what the shot would turn out like,” she said, “but my camera got super cleaned [from the light] which was cool!”

Returning home from the photography shoot at UNMC, Kessler said, “I changed my clothes, threw them in the wash, I disinfected all my gear, my shoes, took a shower and that was that. I didn’t waste any time.”

After witnessing UNMC’s attempt to clean masks, Kessler said, “This process- it works. People just have to get past the idea that the mask has been used before. UV light kills things. That’s why I couldn’t be in the room.”

Overall Kessler believes this pandemic could easily become “the story of a generation.” She is determined to document the Midwest perspective and hopes that people will gain a newfound respect for those who bring information to the general public—they too are on the frontlines.

Her images were eventually published in an online article from The New York Times that addressed UNMC’s efforts to use UV light to clean and reuse masks. “I am fortunate to be at home with my family & still contribute to the @nytimes coverage of the COVID-19 pandemic,” wrote Kessler in an instagram post, “I’m proud of Nebraska Medicine’s innovation that will relieve the problem of dwindling medical supplies. ”

Calla Kessler is now pitching some new story ideas of her own and has once again found herself reporting the Omaha perspective. More of her work can be found here.