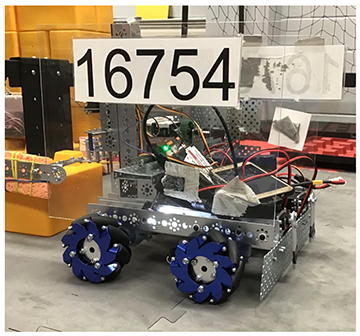 Sounds like a prison inmate, right? But in reality, this was the title given to Marian’s turnaround Robotics team and the contestant tag given to the most valuable member of the team: Bam Bam.

Bam Bam is about a foot and a half tall, has four wheels and a catapult arm used for pushing and tossing blocks around an arena. At the beginning of this school year, the Marian Robotics team built Bam Bam, their humble and mildly violent robot, and now, they are the reigning Robotics state champions.

But before the Marian Robotics team became state champions, they were seven students and a coach in the back of a physics classroom-turned Robotics lab. The team officially came together a long, long time ago in a high school far, far away on Sept. 5 at Creighton Prep for the unveiling of the season’s Star Wars inspired theme: Skystone.

The team didn’t have much in terms of space or supplies. “We received a rookie grant from First Tech Challenge (FTC) and club funding from Marian and got to work,” said Robotics coach and STEM teacher, Dr. Sharon Genoways. After the robot was constructed, the team began to program it. What they did not program was the robot’s violent tendency to smack anyone in the vicinity with its arm, earning it the affectionate nickname, “Bam Bam.”

In addition to being a rookie team, 16754 was the only all-girls team in every competition they entered. “At first, I thought we might not be treated equally or there would be difficulties,” said team captain, senior Clàudia Archer, “but I think we made it known through the way we composed ourselves that we are empowered young women.”

Team 16754 had its share of ups and downs during the course of the season, but soon the team made a name for themselves in the community and made it to state Robotics in Cedar Rapids, Iowa, a massive step up for a rookie team in a new program.

“Every time we qualified for the next level of competition, I felt like I was in a dream,” said team captain and senior, Delaney Baumberger, “The whole experience was so unreal.” The rest of the team seems to share her sentiments. “After winning a few matches, we remained in the top 10 but didn’t know it. We made it an underlying rule to not look at the scoreboard,” said Archer. Defying both the team’s and onlookers’ expectations, Team 16754 won their final match and took home the title of state champions.

After their hard-won victory at state, Team 16754 had been scheduled to compete against teams from across the globe in the FTC World Championship in Detroit, Mich.

The championship unfortunately had to be cancelled due to the COVID-19 outbreak. “The girls were more motivated, dedicated and creative than ever in the weeks leading up to Worlds, and having it cancelled was heartbreaking. I really wanted this for my seniors,” Genoways said.

The team with their robot at State. 16754 won the state championship and intended on competing in FTC Worlds. (Photo courtesy of Dr. Genoways)

Although the cancellation of Worlds is disappointing for the team, they aren’t letting it get them down. Sophomore team members, Jada Williams, Lillie Devine, Anna Stefan and Lauren Ali have the opportunity to try for Worlds next year in Robotics, and they are encouraging other students to join as well. “Robotics requires no prior experience, and if you want to learn communication, collaboration and all-around STEM skills, Robotics is the place for you!” Genoways said.

Senior team members Archer, Baumberger and Mint Suthamma unfortunately won’t be able to compete again next year, but will be using the skills they learned from Robotics all the same. Baumberger will be attending South Dakota University in the fall, where she intends on majoring in mechanical engineering. Archer will attend the University of Iowa, where she will major in biomedical engineering, and upon her return to Thailand, Suthamma will major in computer engineering.

One response to “Robotics state champs denied ‘world’ of opportunity”