By expressing specific needs to administrative members, Marian girls have the opportunity to proactively transform the school’s trajectory moving forward. In June 2020, dozens of students opened up about their personal experiences as a member of a minority community at a majority white school. Some collective struggles shared by these individuals include a lack of staff diversity and an inconsistent message of allyship from peers, faculty and administration. 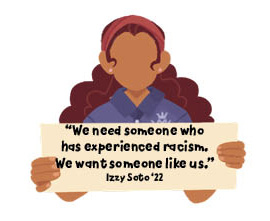 “We need someone who has experienced racism. We want someone like us,” junior Izzy Soto said, a Latina student. Soto believes a more diverse staff would make it easier for students to speak openly about their experiences as a minority. “It’s tiring to explain racism to someone who doesn’t know how it feels. If I were ever to have a racial problem I would feel more comfortable going to anyone of color.” Soto’s comments were echoed by other students with the desire to be understood without speculation and a factor in the administration’s decision to hire a diversity coordinator.

However, it is not just current students seeking change. “Even though I won’t be at Marian next year, I want it to be a better place for the people after me,” alumna Agoum Monydhel said. “This school needs to be pro life for all shades,” Monydhel said. Her hope is an example of allyship. As a Black woman, she is speaking to improve the Marian community and ensure the wellbeing of those after her, despite knowing she will not witness the results firsthand.

Effective allyship can be manifested by amplifying unheard voices, educating oneself and supporting various policies to create a more just society for all. Some minority students at Marian feel the message of allyship is inconsistent and recently explained that vocal support from staff, students, and administrators is easily contradicted by the presence of a majority white staff, optional school-wide diversity activities rather than mandatory ones and an absence of a zero-tolerance policy against racism. Administrative participants heard these concerns loud and clear and have since turned the criticism into positive change.

With the help of staff and administration, Marian girls are transforming the school’s trajectory before the school year has even started. A diversity coordinator has been hired for the 2020-2021 school year, mandatory faculty/staff diversity training is scheduled and a diversity board will soon join the ranks with other student-led initiatives at Marian.

As a result of these dynamic changes and other planned action steps, this next year will be a significant step towards a more inclusive community for all Crusaders.