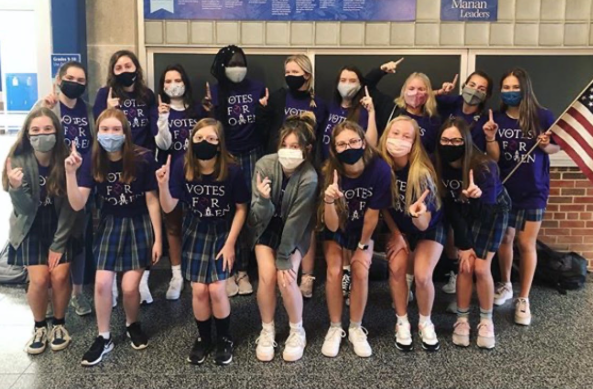 More than 100 years ago, fierce and determined young women wanted to see a change in how they were being treated. They wanted to be able to vote and get better pay than what they were getting. These women paved the way for women’s rights today.

These protests and the demand for change got the attention of many other young women. It encourages them to feel empowered and to show that off. At Marian, part of the school’s mission is to make the students feel like empowered, independent leaders. Marian girls are not afraid to speak their mind and bring attention to topics they feel need to be talked about.

One hundred years ago, that is what these women did. They pushed and pushed until the problems that they saw were changed. “These women were fearless, and it is because of them that I am lucky enough to go to an all girls school where I can get an amazing education to succeed in the future,” freshman Cecelia Elkjer said. After the 19th amendment was ratified, white women could now be an active part of political society.

The right to vote was one of  the many changes that was made. Only 40 out of 680 Marian girls can vote but many take the opportunity they have and vote for important changes in society.

“It is important to vote about the things you want to see and things that you want a change for. We should be very thankful we have the opportunity to vote,” junior Anna Schmidt said. “You never know the impact that your vote could have on something. Even though I can’t vote yet, me and my sister Laura (a Marian alumna) talk about the people we want to vote for and who we want to see as a leader in our community. It’s like her vote is also my vote.”

Even though most girls cannot vote yet, Marian still gives students an opportunity to vote for people they want to see lead their class. Each grade votes for six class officers and three Student Board members. The Class of 2024 will be holding its elections during the week of Nov. 16. The school typically waits until after Freshman Retreat to start the process of running for office. Candidates will give speeches to their classmates during the Crusader Activity Block on Thursday, Nov. 19.

“I think it’s really sad that we didn’t get the same right as everyone else just because we are women of color. We have a voice, too, and we should be able to use it and speak up about what we think is wrong,” junior Justyce Cribbs said.

Over the past several years students have seen a lot of changes made to women’s rights, there are still a lot more to come. In 2019, it was reported that there were 102 females in the House of Representatives and 23 females in the Senate. This is the most women to be in Congress in history. Double standards still exist for many women, and women still don’t make the same amount of money as men do. Women need to continue to voice their opinions and demand to see solutions to the problems they bring forth.