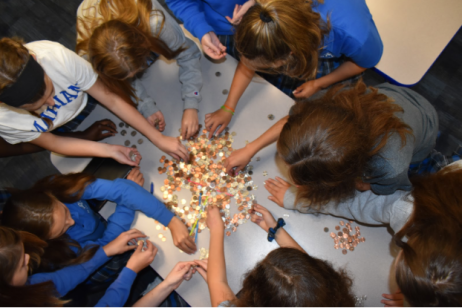 The freshmen of homeroom 304 count their spare change.

In hopes of raising more money for its annual student-led fundraiser, Walk-A-Thon, Marian recently began accepting online donations via its website. Since Walk-A-Thon’s inception in 1984, the school only accepted physical forms of payment. However, more recently Marian decided to make this slight change from previous years, by adding a digital aspect to the cause.

“The biggest reason for the addition of the online donation option was to make it easier for students to raise their goal,” Ruesch said. “Sending in cash or a check may not always work for everybody, so the convenience factor was really the driving force.”

The online payments totaled nearly $38,000 from 626 individual donations. Approximately 30 percent of the total amount raised ($131,623) was sent in through the website. Digital donations came in from 31 different states, the furthest being Hawaii. Nebraska had the most online contributions with 452 donations, according to Ruesch.

As many expected, the website was a big hit. “I think that the online donations were incredibly successful! Just looking at the total dollar amount raised and all the different states that money came from, I would say it was a success!” Ruesch said.

While the website did attract many pledgers, it also had some skeptics, particularly among older people. “We had some grandparents call in to donate instead of using the website because they didn’t trust its security,” Mrs. Beth Dye, a new Student Board moderator, said. “Instead, we had to get their donations through the phone.”

Overall, the addition of digital donations was beneficial to Walk-A-Thon. “I am very pleased with how Walk-A-Thon turned out this year,” Dye said. “And I look forward to improving aspects of it next year in order to help the girls raise more money.”

Congrats to the Marian Network staff for winning multiple Excellents and Honorable Mentions from the JEA High School Journalism Competition!⭐️
secret santa with the network! 🎁 merry christmas and happy holidays! 🎄
congrats to Marian’s BURN literary magazine for a successful showcase on Tuesday evening! be sure to pick up a magazine either in homeroom or in the journalism room!
congratulations to jasmine buttler, holly mccutcheon, colleen sully, maggie timmerman and daisy owen for receiving honorable mention and maggie mantini and emori hamilton for receiving excellent at the JEA writing contests in Washington, DC!