Every fall, Marian girls are encouraged to bring in at least $40 per student for the student-led fundraiser called Walk-A-Thon. However, to reach the $95,000 school goal, each girl would have to bring in around $125. The pressure to hit the goals encourages girls to get creative. One of the easiest ways to collect money is to go door-to-door.

However, not everyone is willing to give to random girls knocking on their doors. The fact that the donators get nothing in return can turn people away from donating.

Junior Sylvia Poulos had an interesting experience during her freshman year. It

was her first time going door-to-door and she was asking in her neighborhood in Council Bluffs. Poulos knocked on the door of a house that she wasn’t familiar with. The woman opened the door for Poulos, and her eyes scanned the Marian uniform. The woman exclaimed, “Oh! You go to Marian?!” she continued, “My daughter goes to Duchesne.” Poulos said the woman instantly slammed the door on her.

Another junior, Molly Monahan, had a frightening experience with her friends Sophie Stevens and Sophia Virgilito. Monahan and her friends drove to a new neighborhood that they had never gone to before, one known for having a majority of  elderly people living there.

When the two girls approached the door of one house, Monahan said that an old man yelled, “What do you little girls want? I don’t have any money for you!” Scared, the three girls sprinted back to their car and drove to a different neighborhood. 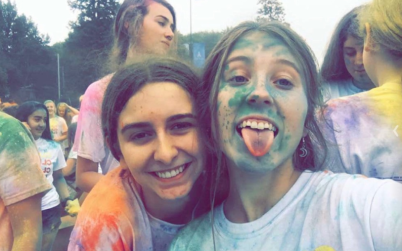 Monahan said that she and her friends were, “Confused and scared.”

Lesson to be learned from this: be prepared when going door-to-door. The reaction possibilities are endless. Don’t take it to heart when someone tells you “no.”