The Walk-A-Thon T-shirt may just be another Marian shirt thrown in the bottom of a drawer, but there is actually an entire process behind the making of it.

“We met in early August as Stubo and did a mailing out to a whole list of corporate sponsors that we reach out to,” Student Board co- moderator Mrs. Beth Dye said. After the letters were sent out, every member of Stubo then made follow-up calls to secure the donations, which brought in about $2,500. The money collected from sponsors covers the cost of the T-shirts, as well as the color packets.

Senior Lucy O’Brien, the Vice President of StuBo, was in charge of Walk-A-Thon this year. Her role included designing the annual WAT T-shirt, which she made on a website called Graphic Edge. “Over the summer I contacted Maeve Nelson [Marian alumna] and she really helped with the T-shirts,” O’Brien said. Thanks to O’Brien, the entire Student Board, and multiple sponsors, every Marian girl received a new T-shirt to cover in color on September 27. 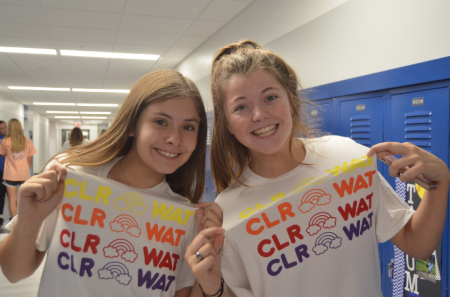 Moira Hale ‘21 and Bridget Gerards ‘21 show off their new T-shirts before the walk. Photo courtesy of Anna Kidder ‘21.

SEPTEMBER DUMP!!!
MEET THE STAFF! Maddia and Ella are the two main editors for the Marian yearbook, and Nina and Maggie are the main editors for the Marian Network! They are the boss ladies in charge and the people to go to when you need help!
Today Yearbook is taking on Walsworth Journalism Camp! We are all SUPER EXCITED to learn about how we can make our yearbook amazing!!! 🥳🥳
MEET THE STAFF! Megan is the online editor for the yearbook, and Kyra is the online editor for the network! We both create the google surveys and run the mhs.pub instagram account. Kyra manages the online digital network, and Megan is also the graphics editor for the yearbook. We are both super excited for the rest of the year! 💚