Most Marian girls at least know of Mrs. Michelle Delisi. Whether they’ve had a past ballet and tap class, worked in the musical, or simply seen her zipping through the halls in her brightly colored tracksuits, she’s a huge presence at Marian.

During her 41 years here, Delisi has held many school positions, most recently working as the Assistant to the Principal, where she manages all of the little details of Mrs. Sullivan’s administrative duties (such as coordinating the school calendar and helping to arrange substitute teachers). While she loves this job, nothing excites her more than dance.

Delisi has been deeply involved with the arts here for many years. In addition to leading the Pantomime Troupe and formerly coaching the Dance Team, she has choreographed more than 40 musicals and plays, starting with Bye Bye Birdie as a sophomore in 1972. As an avid dancer herself, she spends her free time giving insight to young ballerinas at Angie’s Dance Studio in Omaha. Delisi has helped at this studio since she was 12 years old.  The studio has been owned by her mother for 55 years.

However, Delisi has experienced quite an obstacle in the past couple of months: a torn meniscus in her right knee. After surgery on Sept. 3 for an arthroscopic meniscectomy (a procedure to remove the torn part of the meniscus), she faced a tough road ahead, with her administrative duties accumulating and the production of the fall musical White Christmas ramping up.

“I knew this (surgery) wasn’t gonna get in her way,” said Delisi’s right-hand woman, choir director Miss Lauren Morrissey. “She’s such a hard worker and just would do anything for this program,” Morrissey said of Delisi’s efforts toward all of the musicals the two have collaborated on, especially White Christmas. 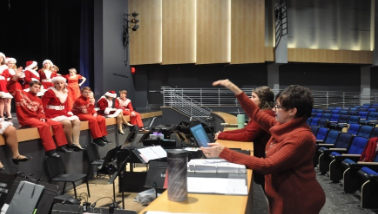 Delisi works with White Christmas cast members to help them see her vision for the scene. The musical ran from Oct. 24 to Oct. 27.

The amount of choreography involved with this particular musical has taken a toll on Delisi. “Sitting down and choreographing… that’s just not my nature,” Delisi said, explaining how difficult it was for her to express her desires for certain steps without being able to actually show them to her dancers. Even more frustrating to her is that she only “[has] permission to do a few easy things,” which is out of character for this self-proclaimed independent.

Despite all of these troubles, Delisi has enjoyed every bit of the musical. For a woman with so much theater and music experience under her belt, she said White Christmas has been one of her favorite musicals to work on because of her personal connection: her family has made a tradition of watching the movie on Thanksgiving night for several years.

Also, don’t ask her to pick a single favorite musical she’s been involved in: besides White Christmas, she listed off several, including Hello, Dolly!, The King and I, and Grease, and was torn between those. The one musical, though, Delisi said was most challenging to produce was The Little Mermaid, because “we (Marian) had to follow the protocol of Disney.” Only seven other high schools in the United States were given the go-ahead by Disney representatives for the musical, which had never before been produced at the high school level. Because of this, copyright and production laws were very strict. Even the costumes had to be made from scratch. But overall, Delisi said the experience was “so worth it.”

Though dance is what got her injured (she was teaching tap to a group of boys to audition for White Christmas when she tore her meniscus at the end of July), it’s also what has gotten her through the recovery stage. Her passion for the theater is like none other and spills into her compassion for all dancers and musicians. Maybe that’s why everyone calls her Mama D.